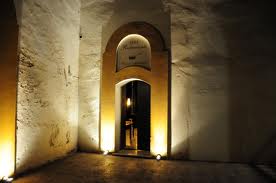 Francis Mallmann is Argentina’s most renowned chef in the world, being one of the exponents of the regional nouvelle cuisine and rustic recovered based ring with a career cuisine. In 1995 he was awarded the Grand Prix de lart of Cuisine awarded by the International Academy of Gastronomy. It has only four restaurants in the world, being two in Mendoza: The Vines Mendoza and 1884 Restaurant is located within the Escorihuela Winery and is named after the year in which the wine cellar that houses it was built.
1884 is a tribute to Mendoza wines conjugated Andean cuisine. The design respects the original features, historical monument of the city. This has details in its decoration, as painted walls with earth to san Andean own wine purple, turquoise opaline chandelier you brought especially from Italy, original checkerboard flooring and many more that deserve to be known.
The menu is separated into fire, grill and clay oven and cooked meats has exceptional sight, a typical dish the steak, a special cut made to a simmer.
The underground cellar has 85 labels Mendoza wineries and a bar equipped with drinks from around the world.