You are here: Mendoza » Harvest Festival » The Central Act 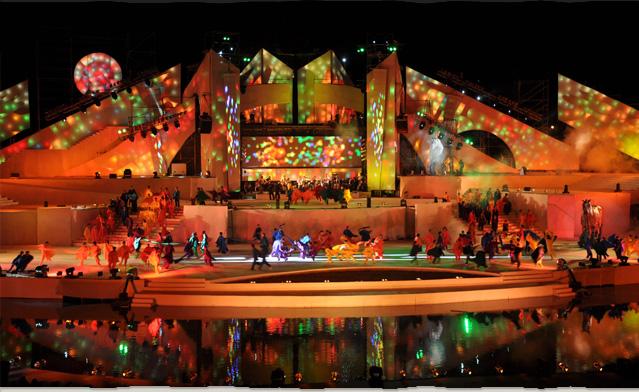 It is carried out the first Saturday evening of March; it is the culmination of the harvest with a show in the central Greek Theatre Frank Romero Day, located at the foothills of Cerro de la Gloria at General San Martin Park and the work of the architect Daniel Ramos Correas.

In the central act, there is the election and coronation of the Nacional Queen of the Harvest, after a party that shows a series of paintings representing life in Mendoza, the rural and urban areas.

The Central Party is organised through an artistic script and the participation of hundreds of dancers and actors on a stage of great dimensions. Thus, artistic expression and the products of this land are combined in a multitudinous festival with a local stamp. On Sunday, the entire spectacle is repeated, adding numbers of artistic interpreters of the national hierarchy and a great fireworks show.

Nestled at the foothills bordering the General San Martin Park, the Greek Theatre Frank Romero Day, has served as a stage since 1963
for the culmination of the harvest celebrations.

This stage has been declared a cultural heritage of Mendoza by the decree No 797/1995.

The author of the original project was the architect Daniel Ramos Correas, director of Forests and Parks during the governorate of Rodolfo Segura Corominas. Since the enactment of a decree of March 8 of 1940 starts its construction. Since 1941 and up to 1950 the works and suffered disruptions and in the San Martín year 1950 it was used for the first time with the Cantata Sanmartiniana.

According to the manifestations of the architect Daniel Ramos Correas: the location “was prepared by nature, it was the ideal place and only needed minor works of men”.