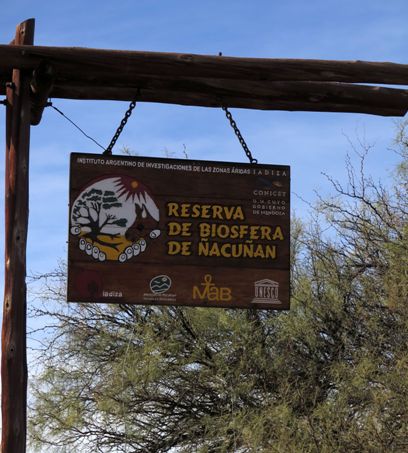 * Reserva Ñacuñán
It is a long plain with a little slope, runoff and chains of dunes.
Since 1986, it is part of the World Network of Biosphere Reservations, the Programme Men and the Biosphere from UNESCO.
In the Province of Mendoza, it was the first reservation, established as a Forest Reservation, for the protection of the trees forest, felled indiscriminately until 1937; it aimed as well as at the soil and native plant species conservation such as the carob, chañares, jarillal and zampa, and as animal species vizcachas, hares and feral pigs.
It is the ideal landscape for the practice of ecotourism, to observe the flora and fauna, to do photographic safaris and hiking.

* Tambo
Visitors will experience a different and enriching experience, as well as buying some products. In this dairy farm several dairy products like yogurt, cheese, and fresh milk are produced. They are made in a way so that the customers who want to know the processes before the sale and for subsequent consumption can do so.

* Adventure Tourism
The nice climate of Santa Rosa and its rugged landscapes are ideal for outdoor enthusiasts, the observation of nature and adventure tourism.

* Monument Batalla de las Trincheras
It was built to honour the people killed in the Battle of Santa Rosa; there were two fratricidal battles, which occurred in the Department of Santa Rosa, on October 29 and December 7, 1874, between Argentine government forces and the revolutionary.
The revolution of 1874 broke out because of the victorious election of Nicolás Avellaneda, over Bartolomé Mitre, with the excuse that his victory was due to a fraud, which had existed, but on both sides. Two military groups joined the revolution, one in the countryside of the province of Buenos Aires, and the other, under the command of Jose Miguel Arredondo, who after taking the province of Cordoba, moved towards San Luis and Mendoza, where the Colonel Amaro Catalan was expecting at the head of the provincial militias. On October 29, 1874, Arredondo forces defeated the Mendoza militia, and the death of Catalan decided the battle. Arredondo occupied the city of Mendoza and overthrew the governors of Mendoza and San Juan. Soon after came the news of the death of Mitre in the Battle of La Verde.
Shortly afterwards Roca arrived to Mendoza, and Arredondo was waiting at the same location in Santa Rosa. On December 7, 1874, a countryman of the area led the forces of Roca from the rear, so that Arredondo was caught and forced to surrender. All the revolutionaries were killed or taken as prisoners.
Therefore this revolution was defeated, and thus the government of Avellaneda saved. Roca was promoted to the post of General, but knowing that Arredondo was going to be shot, he left the latter escape to Chile. The Battle of Santa Rosa meant the end of the revolution of 1874, and the military campaigns of civil wars with battles in the open fields as well.