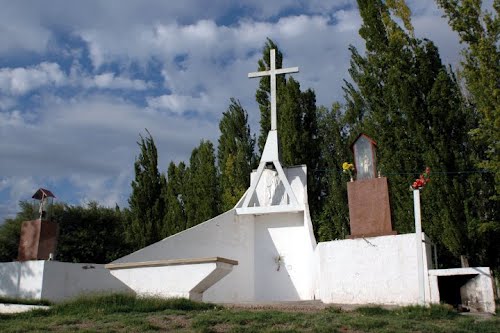 * Museo de Historia Regional
It was inaugurated in 1999 with the donations of pieces and objects used for farming. Among them, there is the telephone of the old Railway station and the Morse telegraph equipment. There are photographs of the first families settled in La Paz; the first car of 1940, farming and mortars elements, wagons of 1820, the stone mill to grind wheat, looms, a Helvetin coffee maker of 1920, a water filtering stone from 1900.

*Altar de la Fe and the Calvary
Those are monuments with religious sculptures, located at the entrance of the Department. There are the images of the Virgin, San Cayetano and San Juan Don Bosco

* Capilla Nuestra Señora de La Paz
It is in Villa Antigua. In the chapel, there is an image of the Virgin made by the Indians with wood and natural hair; therefore, it has a great historical and religious value.

* Parroquia San José
It was inaugurated on the 13 of March 1941. It looks like a primitive church, there is an old rain tank and it is surrounded by olive groves, fruit trees, orchards and grapevines.

* Centro Civico
There are the Municipality building, the post office, the police station, the Civil Registry, the Court, some stores, a FM radio station, and the sports centre.

* Paseo Artesanal
There different arts and crafts made in the Department are exhibited.
It is located on the sidewalk of the Municipal Museum, where there are seats, streetlights and a rain tank, which reflect a colonial style.

* Monumento Cadetes Chilenos
In the old railroad village called Alpatacal, on July 07 1927 there was a tragic accident where Chilean cadets died while they were on their journey to a parade in Buenos Aires to celebrate the 9 of July, the Independence Day.

* Estación de Ferrocarril
It was the first station of Mendoza to receive a locomotive in 1883. On its surroundings, nowadays, there is the Dr. Bonzano Park.

* Rincón Sanmartiniano
There are the busts of General José de San Martín, his wife’s Remedios and their daughter’s Merceditas.

* Río Tunuyán
It crosses the Department of La Paz from the West to the East.
It is used for off road competitions, considering that, at the moment, it remains dry great part of the year.

* Escuela Primera Junta
It was inaugurated in 1928, the Historical Building today is considered Patrimony of the Province.

* Camping: Nature lovers can visit this desert spot, 60 kilometres south of the head Village. It is ideal for adventure tourism, horseback riding and other activities.

* El Lechucito: It is located 20 kilometres north of the head Village and offers a great alternative to practice adventure tourism. In November, there is the Fiesta Departamental del Puestero (Departmental Celebration of the Countrymen).

* Arco del Desaguadero
This building was inaugurated in 1936. Its structure is easily visible from the route that goes from San Luis to Mendoza. It is considered the East entrance to the Province; it receives the travellers with a “Welcome to Mendoza, the Land of Good Sun and Good Wine” greeting.
There are an inn, a Chapel, and a Tourist Information office, which provides information about La Paz in addition to the information about the whole Province.

* Villa Antigua
Located to about four kilometres to the Southwest of the head village of the Department, it was the first village established on the banks of the Tunuyán River, but at that time, the constant attacks of the natives forced the population to be transferred to current Head Village.