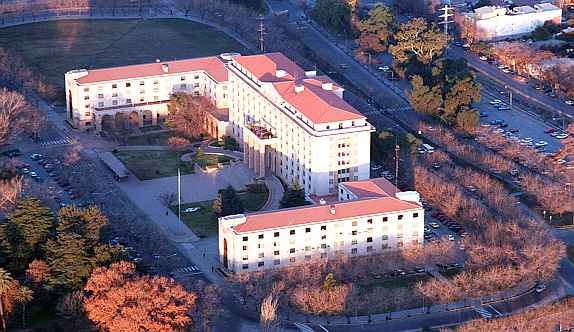 Set in the places that once were occupied by the Agronomic Farm, in the year 1941 the project of the Civic Neighbourhood is approved by law, and then it is inaugurated in 1951.

It centralizes the government buildings in Mendoza, for example:

*The Courthouse
The magnificence of its facade is enough reason to note the building among the others that make up the so-called “Civic Neighbourhood.” This was the only building that was finished following the original project of the architect Belgrano Blanco in the 1940s, in addition to the Government House.

*The Government House
On the first floor there is the flag of the Liberation Army displayed, guarded by soldiers from Mountain Infantry Regiment 11 “General Las Heras” from Tupungato (the oldest in Mendoza).
It was the first building built by the modular system in Mendoza.

*Terraza Mirador
From the terrace of the Capital municipality building, from a height of 30 metres, you get an excellent panoramic view of the oasis town and the mountains.
It is open to the public and has a viewfinder that has the range of up to 50 metres.

*The Conference Center
The Congress and Exhibition Centre “Governor Emilio Civit” surrounded by parks and gardens, has a versatile infrastructure with three buildings that complement each other and enhance potential of the centre.

*Enoteca de las Artes
This building once was the National School of Viticulture as well as an experimental winery. Since 1995, it has worked as a temporary exhibition hall of the Congress Centre. In the basement, there is a permanent exhibition of wines from the main wineries in Mendoza.

*The Ecological Park
In the west of the Civic Neighbourhood, there is this green space ornamented with sculptures and fountains of different sizes. The surrounding it there are the Customs building, the Congress and Exhibition Centre, and the Enoteca de las Artes.