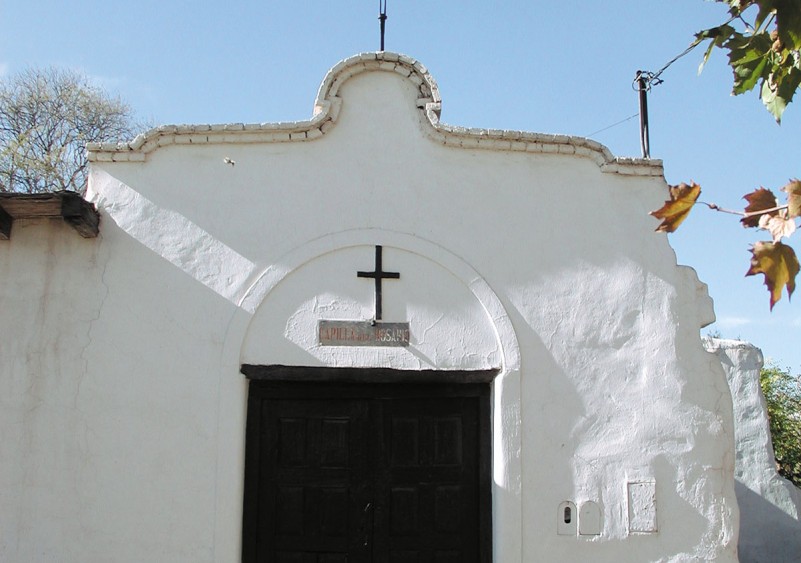 It is limited in the north by Buena Nueva, Buenos Vecinos, Lillo alley, Milagros and Ferraris, in the east by the Chachingo Canal, in the south by the Godoy Cruz Street, and Paladín, and in the west by the General Belgrano railroad. With an area of 3.42 square kilometres and a population of 16167 inhabitants, its population density is 4724 inhabitants per square kilometre. There are five schools, a police station, a station of voluntary firefighters, and a health centre. The district of Capilla del Rosario is located in center of the department and its main activities are the residence and the retail commerce. Its main routes are Ferrari, Paladini, Godoy Cruz, and Buena Nueva. The secondary one is Higueritas Street.
History: Its name comes from the historical Chapel of the Rosary, which is on a street with the same name, the one that starts on the Tomás Godoy Cruz Street, and extends itself from the north to the south until the Los Guindos Street.
This chapel was built around the year 1830, by the order of the Priest Gabriel Bejarano. This native priest of Bolivia, studied in Mendoza and Córdoba, exerted his ministry in this province. He had the Chapel and a house for Spiritual Exercises constructed, in the locality of Acéquias de Gomez, property of the Videla family. When the buildings were inaugurated, he prophesied that it would be a Quarter of Soldiers, a house of exercises and finally Noah’s Arc, where innocent doves would find their only refuge in the middle of the misfortune whereupon God would threaten humanity, but that would also corrupt humankind more every day. The soldiers of Rosas were lodged some time in the chapel; soon it was destined to be a Parish and House of Religious Exercises. In addition, the nuns of the Company of Maria were lodged there. The ferocious earthquake of Wednesday, March 20 1861 left Mendoza and especially Guaymallén, without any traces of its history.

It is limited in the north by the 2 de Mayo Street, in the east by the El Sauce stream, in the south by the Celestino Argumedo Street, and in the west by Escorihuela Street.
With an area of 7.65 square kilometres and a population of 2268 inhabitants, its population density is 296 inhabitants per square kilometre.
There are two schools, a police station, and a health centre. The district was developed in the rural area, and it is dedicated to the agriculture and complementary activities. The district has main streets that define its perimeter: Argumedo, and Paladín. These routes connect it with the neighbouring districts. History: This is an indescribably beautiful place; it began as a rustic zone but the hand of the man transformed it into an orchard. This is an excellent quality orchard area, to which the flower production and fruit trees should be added.

It is limited in the north by the Tulumaya auxiliary canal, in the south by the Ferraris Street, in the east by Tulumaya canal, and in the by the San Miguel Street.
With an area of 17.45 square kilometres and a population of 6254 inhabitants, its population density is 358 inhabitants per square kilometre.
There are two schools, a micro hospital, and it does not have a police department or a police station.
The District Puente de Hierro is located in the east of the department, within the rural area and is destined to the development of the industrial zone, to the reforestation, and the derived activities. It has a route of inter-departmental connection that is the Severo del Castillo Street, and the Road Costa de Araujo. The main routes are Ferrari, and San Miguel.
History: By the decree, 3702/93 Puente de Hierro was created as a District, the area between the Tulumaya auxiliary canal, Nuevo Tulumaya, Fernandez Stream, Ferrari and San Miguel Street from Ferrari to Nuevo Tulumaya. Modifying the Corralitos district and becoming the district number twenty.