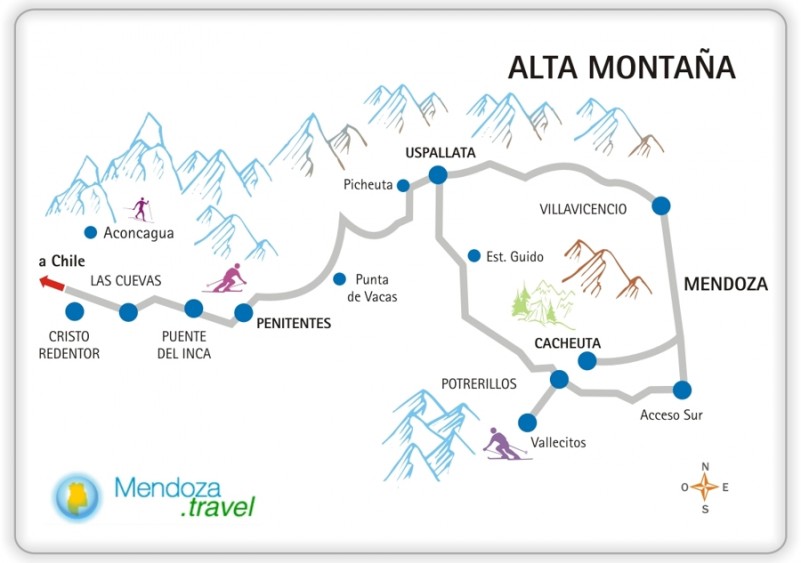 The High Mountain tour, can be done all year long, departing from Mendoza city, it goes through excellent roads, passing by an incredible landscape along the Mendoza River, as far as border with Chile.

After the wine area of Luján de Cuyo, in the first range of the Andes, there is the Potrerillos dam, and the new village where it is possible to buy some arts and crafts, fill up the tank, or taste an exquisite home made bread.

Going a little further, about a hundred kilometers from Mendoza, there is Uspallata, the scenery of the Huarpe Indians occupation during the pre Spanish era. The urban area in this valley offers various options of hotels and restaurants. Near there are Las Bóvedas, some very well preserved historical constructions made with adobe, in which Fray Luis Beltrán, chaplain of the Andes Army, under the orders of General José de San Martín, forged the cannons and the weapons used by the latter to liberate Chile.

The tour continues with a visit to the villages of Picheuta, Polvaredas and Punta de Vacas, a departing point to the famous village of Los Penitentes. Approximately 167Km from Mendoza there is one of the ski resorts of the Province; it is open from June to August and it provides a beautiful setting for adventure sports during the rest of the year. There you will find a lift that makes it possible to enjoy a privileged panoramic view of the area. Continuing further ahead, in Puente del Inca, 2.720 metres above the sea level, the river Las Cuevas has carved the mountain forming a natural bridge, and in that area there are some hot springs. In that area, there is also the Climbers Cemetery. Just a few kilometres from the border with Chile, there is a magnificent viewpoint from where you can appreciate the beauty of Mount Aconcagua. A paved road starting at the International route makes it possible to enter a few kilometres towards the beautiful Horcones Lake, and into the Parque Provincial Aconcagua.

Driving along the International route, there will be the Customs Office Horcones, and a few kilometres ahead, on the border with Chile, there is Las Cuevas village, built in an European style, 3.200 metres above the sea level.

Between Las Cuevas and the international tunnel which connects Argentina and Chile, there is a road that, depending on weather conditions allows people to go up to the monument Cristo Redentor, situated at 4.200mts of altitude; this monument represents the friendship among Argentinians and Chileans. The return to Mendoza city is done by the same road.