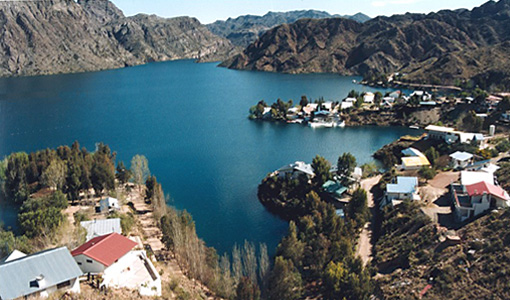 – Diamante River. It is born in the Andes Mountain range in the homonymous lake and its waters also have also been used for the hydroelectric production. There are four power stations that generate 340,000 KW/hour.

– Dique Agua del Toro. It is located 84 kilometres from the City of San Rafael, in the denominated Pampas Amarillas, 1300 metres above the sea level. In its 1050-hectares body of water it is possible to fish and to practice nautical sports such as windsurfing, diving, speedboat racing, rowing and sailing.

– Villa 25 de Mayo. It is 25 kilometres from the head city of the Department, and is considered an inhabited museum, with adobe houses and streets flanked by centennial trees.
It arose in 1805, after the foundation of the San Rafael del Diamante fortress, which at the present time is a National Historical Monument.
The church Nuestra Señora del Carmen still preserves the first images and clothes of its epoch.

– Galileo Vitale. This is 27 kilometres from San Rafael, where in the company of its magnificent groves, it is possible to do recreational activities and camping. It was the first work constructed on the Diamante River with the objective of using its waters for the artificial irrigation. The distribution is made through a complex system of floodgates and concrete channels. Going downstream from this dam, there are “Los Coroneles”, the fourth power station of the Diamante River basin.

– Los Reyunos. This reservoir is 35 kilometres from the head village of San Rafael. There are 734 hectares where fingerlings are sowed and that generates good fishing of pejerreyes and salmon like fish.
In the west margin there is tourist infrastructure where it is possible to lodge, to rent boats, boards for windsurfing, make long walks, go horseback riding or mountain biking. It is important to emphasize the technical part, its 134 metres wall was constructed with stony materials, compacted with clay; there is an observatory at the top and the access road to the power station is located below the inferior level of the lake.
This power station has the singularity of being one of the first to use pumping in Latin America, which means that in moments of smaller consumption of energy, the turning of its turbines is reversed to return the accumulated water in the compensating dam towards the main reservoir.

– El Tigre. This compensating dam was constructed downstream from Los Reyunos, whose water content is recovered by pumping towards the reservoir Los Reyunos.
It has crystalline waters where nautical sports can be practiced, natural spas can be enjoyed, there are lodging facilities, and it is possible to go fishing for pejerreyes and salmon like fish.