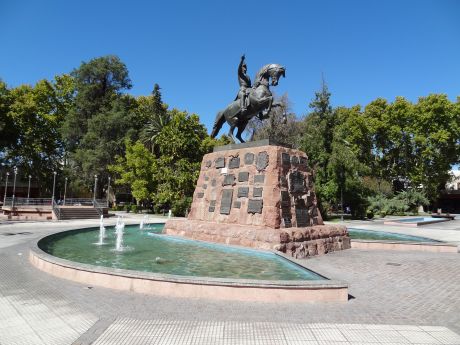 – Biblioteca Mariano Moreno. It was founded in 1919; it has shared its thousand of volumes on Arts and Sciences, with several generations of inhabitants of San Rafael. Every month of October there is the Provincial Book Fair.

– Museo de Bellas Artes. It exhibits sculptures of national and provincial authors, and works of great painters such as Fader, Petorutti, Spilimbergo, Fornes, Victorica, and Castagnino, among others.

– Museo Municipal de Historia Natural. It is located 7 kilometres from the city of San Rafael, in the area popularly called Isla del Rio Diamante. It is constituted by the sectors of: Anthropology, Palaeontology, Geology, History, Zoology, and Regional Folklore, as well as by a modern library and an astronomical observatory.

– Casa de Elena y Fausto Burgos. Legacy of these two San Rafael writers, there is a collection of works of art from the Inca culture, musical instruments, and silver pieces of art, pictorial works and a library with about three thousand issues.

– Casona de Rodolfo Iselín. It is a few metres away from the roundabout of the West access to the city. It was the residence of those who presided over the destinies of the French Colony.

– Rotonda San Rafael, heart of Mendoza. Graphical representation of the logo that identifies San Rafael made with the map of the Province of Mendoza with 17 grape berries that represent the districts and rays of the rising sun.

– Plaza del Inmigrante. It is located across from the old station of the Railroad, built in tribute to the pioneering immigrants.
There is the first locomotive that arrived in 1903, to the French Colony of that time.

– Plaza General San Martin. It is the main square of the Department.
Its present layout was arranged in 1925 and there is a monument in bronze representing the Liberator on his horse over a local stone base.

– Palacio Municipal. Its main façade was inaugurated in 1938 and consists of a tower with its corresponding carillon; this modern building of today was completed in successive stages.

– Edificio del Ex Banco Hipotecario. It has been declared an Architectural Patrimony of the Department; it was built in a Renaissance and the Spanish colonial Rococo styles.

– Catedral San Rafael Arcángel. With a neo romantic style it was inaugurated in 1952; then in 1961 it was declared a Cathedral by the Diocese of San Rafael.

– Iglesia de Nuestra Señora de Lourdes. In its beginnings it was dedicated to San Ambrosio. It was the first church of the Italian community.

– Parque Hipólito Yrigoyen. Located only 10 blocks from the central point of the city, it offers several alternatives to be enjoyed, such as the Greek Theatre “Chacho Santa Cruz” with an outdoors stage and it has the capacity for 10,000 seated spectators; in addition, there are an outdoors sports centre with swimming pool, a small residence for sportsmen, and a sector specially designed for children with a playground.

– Parque Mariano Moreno. Located 7 kilometres from the city of San Rafael, in the Isla del Río Diamante. There are an artificial lake with the grotto of the Immaculate Conception, a camping site with all the essential services, and a Zoo.

– Polideportivo. In this building there is the indoors sports centre with tribunes for 2500 spectators. In its outdoors area there are a hockey on skates rink, a basketball and volleyball court, a football pitch and also the athletics tracks.
In addition, there is a shelter with capacity for 112 people with all the services; moreover, there are the velodrome and barbecue huts.

– Caminos del Vino. The beautiful landscapes that San Rafael offers include the vineyards which the producers of the area cultivate with the inherited experience of their parents and grandparents, demonstrating this tradition of good wine in each harvest.
In this circuit, there are important world-wide recognized wineries, olive oil factories, dryers of fruits, which allow appreciating the great economic movement of the South Region of the province of Mendoza.