You are here: Mendoza » History of the Vine in the old world » Spain 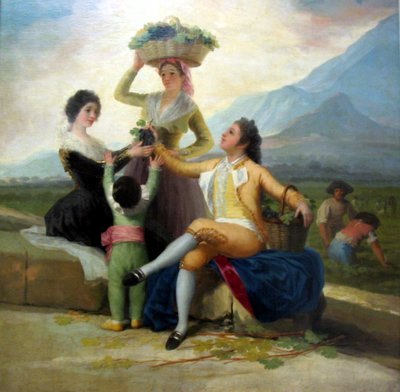 There is no clear consensus on the place where the first vine crops started to be made in Spain and who were the ones who introduced the techniques of winemaking. Various sources indicate that the first vineyards were settled in the southwestern Andalusia coast creating the starting point and place of the oldest vineyards in Spain.

This theory seems the most likely, and it is endorsed by the presence of the Phoenicians in the peninsula since about 3,000 years ago. This merchant town founded a port in the southwest, which was called Gadir (Cadiz, at present). After a while, it was moved inland, creating another city called Xera (now Jere) whose surrounding mountains were planted with vines. The warm weather in the area favoured the strength and sweetness of the local wines, which enabled them to withstand the trips very well. This fact, associated with the merchant spirit of the Phoenicians, meant that as early as the beginning of the Christian era, Spanish wines became one of the most common goods in the Mediterranean and North Africa trade.

Later on, the Romans would be the ones who continued to produce wines on the peninsula; for that, they incorporated their particular methods of winemaking. Among them, the aging in clay amphoras in high and sunny farm, near fireplaces should be highlighted. Apparently, the wines would then get textures, flavours and aromas of fruits, flowers, and even smoke which were greatly appreciated. The need to supply the vast empire and its legions contributed to intensify the already considerable commercial traffic that had reached Spanish wines.
The decline of the Roman Empire and the subsequent barbaric invasion were a brake to the development of the viticulture in Spain. The first Germanic hordes destroyed many plantations of vines. Subsequently, the arrival of the Visigoths to the mainland counteracted the action of the barbarians.
Much more civilized than their predecessors due to the contact with the Romans in the surrounding provinces of the Empire, gave a great importance to the viniculture.

The arrival of Arabs in the eighth century also resulted in some difficulties for the development of the vines and wine production because of the Koranic ban on consuming alcoholic and fermented beverages. Nevertheless, the grapes growing continued and even improved during the period of the Muslim domination.

The primary cause lay in the grapes, which could be consumed as a fruit or used to produce juice: there was no reason to ban neither their consumption nor the unfermented grape juice. Hence, its cultivation could not be prevented, at least for non-Muslims. The second cause is the well-known permissiveness of some dynasties, more liberal towards the dominated Christians, who were allowed to continue cultivating their vineyards and producing their wine, mainly in monasteries.

However, it would not be until after the Reconquest by the Catholic Monarchs when the final takeoff of winemaking would occur. The religious communities and the monasteries, which were restored, played an important role since it would be monks and friars who strived to recover the winemaking tradition. The wine was an integral element in their religious rites, although the priests did not get satisfied with the need for their mass, but they also supplied their cellars to the delight of the locals and pilgrims. Thus, vineyards began to flourish again around monasteries and abbeys, and later on spread to other extended areas.
Over the following centuries, the wine became an essential food in the diet of the time, to which was joined the possibility of marketing it in places other than where it was produced. This development of trade flows increased the birth of the various wine regions and came as a considerable transferring of municipalities and regions taking turns in supplying wine to the Court.

The nineteenth century was crucial to the Spanish wine industry. Although timidly, some reforms began to be established aiming at improving the quality of wine and new manufacturing techniques were introduced to the wine production replacing the traditional artisanal ones. On the other hand, the unfortunate arrival of phylloxera in the northern Europe, which gradually devastated the vineyards in mid-century, helped to consolidate the winemaking in Spain. Many French winemakers settled on the other side of the Pyrenees as the only way to continue their livelihood and brought with them their grape varieties, machinery and methods, including the positioning of the plant, the control of the fermentation and the usage of sulphites. Some of the plantations of Cabernet-Sauvignon and Merlot in existence in La Rioja and Ribera del Duero remain from that time.

However, at the end of the century the plague ended up affecting the peninsula. Fortunately, at that time the solution to extinguish it was already known: grafting on American stems, immune to the plague, thereby the recovering of the vineyards and the production was less traumatic than in other European countries.
Already in the twentieth century, the wine industry had to face two new disasters. The Civil War which condemned the vineyard to negligence, and when the confrontation ended, World War II marked the cessation of the European wine market. Both events were a new blow to the industry, which only after the fifties began to regain its strength.

Since then, the restructuring of vineyards and the renovation and modernization of procedures for processing and wineries have characterized the performance of Spanish wine growers and winemakers, to put the wines of Spain on equal competitive conditions that outsiders, both in the national and global markets.

The transformation of the image and quality of Spanish wines during the last quarter of the twentieth century has been remarkable. A group of hard-working pioneers began to introduce and implement new winemaking technologies equivalent to the modernization of the sector worldwide.

Especially in recent years, a new generation of winemaking masters has managed to unite tradition and quality.