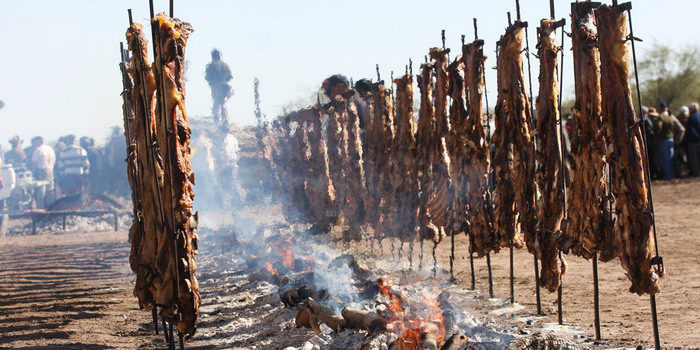 The National Drylands Livestock Festival is celebrated in the Department of General Alvear, Mendoza. It takes place during the first fortnight of May, and is the second most important celebration of the province after the National Vendimia Festival. Originally it called Feast of Mendocino Calf, but could not become national because there was the National Day of the calf. So in 1995 the name was changed, and until today is celebrated every year with an array of activities.

The core of the festival is the Livestock Expo, where more than 100 over 5000 pens where cattle are enclosed are installed, the animals are exposed, lots swear and then takes the shot. Commercial, industrial and craft booths where all participants who want to show their products and handicrafts, and even offer their services are also displayed.

Another important part of the festival is the election of the National Queen of Livestock, which includes the presentation of the candidates for the title in the Queens Gateway and artistic and musical performances with artists of national stature. No shortage of Creole skills and trick riding, traditional in our country, that bring together many people, food court and food stands with typical food and folklore shows.

Guided tours for schools and a traditional lunch with the presence of provincial and national authorities, where delivery is made awards farmers visits are made. It is disclosed to Puestero the year and performed the World’s Largest Roasted Ribs with the Threader. Swears students of agro-technical schools also it takes place and a conference room with days of agricultural and livestock training is mounted.