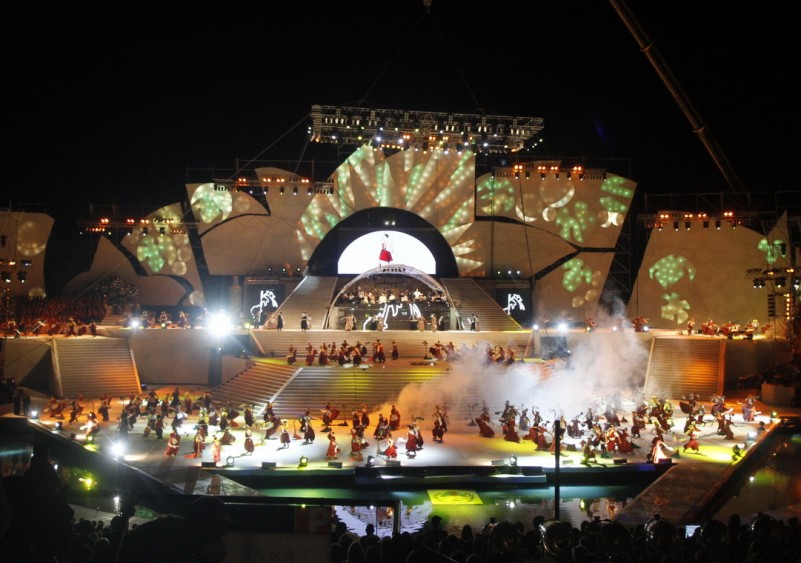 This is the biggest popular festivity in Mendoza. In these days, everything vibrates and is decorated. The crowning of a year of hard work in the vineyard is done at the Central Act at the first Saturday of March night at the Greek Theatre Frank Romero Day.

On the Friday evening prior to the Central Act a parade called Via Blanca de las Reinas is done. There floats from each department, and on Saturday morning, there is the Carrousel of the Queens, where, accompanying the same floats of the night before, there are coaches and carts of the colonial era, vintage cars, gauchos on horseback, invited foreign fellows, groups of actors and musicians.

The Harvest Festival begins in the second half of January, with various acts in each of the departments that form the province, which elect a representative among the women from Mendoza, and all of them, in the Central Act, will compete for the National Queen Crown. In these departmental celebrations, is where the cultural and artistic activities delight the rural workers with folk music and dances, typical food, sports and shows of Creole skills.

The venerated image of the Virgin of Carrodilla, patroness of the vineyards, presides over the religious ceremony of the blessing of the fruit, officiated by the Archbishop of Mendoza, at the last Sunday of February. In this occasion, the governor of the province gives the traditional Beat in the grid of the plough, which represents the former ploughmen call to rest.

The festival is a multidisciplinary show where poets, writers, musicians, artists, actors and choreographers are involved. It is done with around 600 people on the stage, accompanied by more than 250 kilometres of cables, 50 types of pyrotechnic effects to dazzle with tons of fireworks, music, laser beam, and about 400 light boxes.

Then after the show, takes place the election and the coronation of the National Queen. This is when the public participation reaches its maximum emotion. The show is repeated the following night, accompanied by the performance of major national artists. The Great Festival continues until the beginning of April with folk festivals, performances and sports competitions.

Here we should emphasise the Greek theatre called Frank Romero Day, which lies in the west of the city at the foothills of Cerro de La Gloria. It was designed by the architect Ashley Ramos Correa. It is a gem between the hills and has the capacity for 22,000 seated spectators; the latter are joined by a similar amount which are located in the surrounding hills. Several stages are displayed at different levels; the biggest has 130 metres in the front and offers an angle of 180 degrees of visibility.