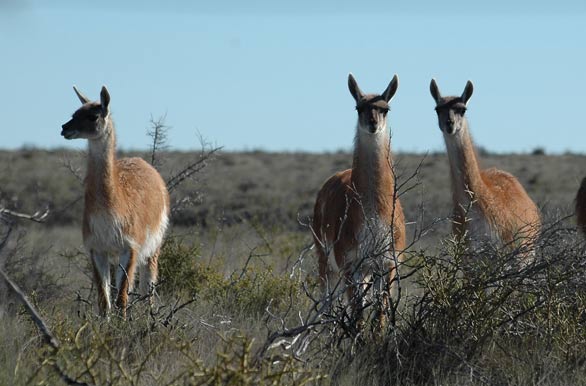 FLORA
San Carlos is included in the Andean, Cardonal and Patagonian phytogeographic Provinces. In the San Carlos plain there is the Algarrobal, while in the Huayquerías appears shrub vegetation with a compact look and low coverage. On the other hand, in the depression of Huarpes and on the Foothills can be seen jarillales, chañares, retamos and grasslands.
In the area of High Mountain, up to 3,500 metres dominate the scrub and sub shrub vegetations; it is very open and low, represented by species such as the yellow wood and yareta. There is also grasslands and huecú pasture.

FAUNA
In the Laguna del Diamante Reservation can be found guanacos, which come in herds during the summer months, during the winter, these animals migrate to the lower regions of the Department. Among the birds that live in the reservation, we find species such as Cauquenes (a kind of wild goose), which likes to make their nests in open places, and many others such as goldfinches, dormilonas, remolineras and agachonas. Regarding the lake itself, there are no native fish species but, instead, there are trouts introduced for sport fishery.
Towards the lower sectors of San Carlos, there are Suris or ñandúes cordilleranos and condors. Moreover, the plains near rivers and streams are especially appreciated by guanacos, Cauquenes and other herbivores, which come to feed on aquatic plants.

The most important river of San Carlos, for its length and usage, is the Tunuyán. This river determines the northern boundary of the Department and provides irrigation water through the “Uco Valley” dam. In addition, the Diamante river is very important; its main tributary streams are Carrizalito, Salado, Hondo and others. The El Diamante is originated in the glaciers of the Main and Front Range and flows into the Desaguadero or Salado.
Towards the east of San Carlos there are many dry rivers. Moreover, throughout the department there are streams, such as the Papagayo.