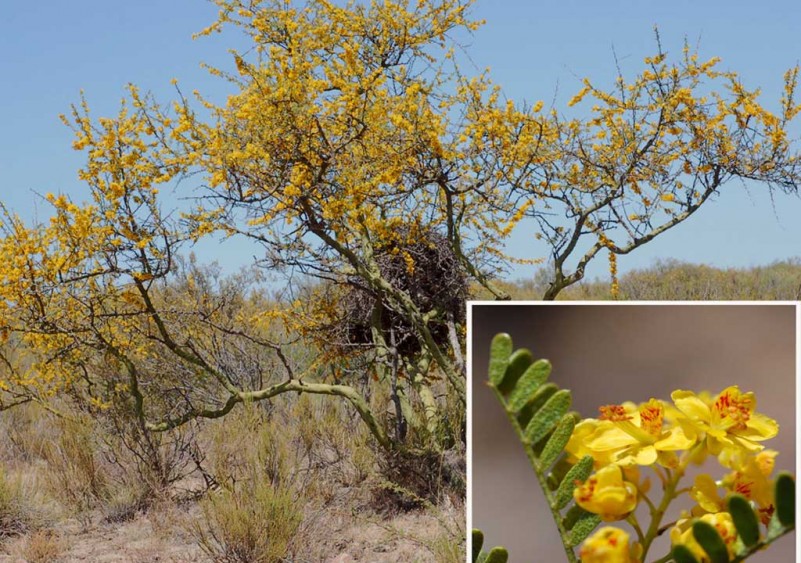 FLORA
The west area of the Department preserves some native vegetation, but the rest of the landscape has been strongly humanized (this is a Department which is almost entirely urbanized), therefore, it is understood that the original vegetation has been eradicated in most part to allow the occupation and the establishments of the population in the area, and to use the wood as firewood or poles.

Some plant species that remain in Godoy Cruz:
– On the slope or high places with maximum runoff are: Chañar brea (Cercidium praecox) and Retama (Bulnesia retama).
– In the plains: Jarilla (Larrea divaricata) and Jarillo macho (Zuccagnia puntata).
– In the channels filled with Quaternary materials there are: Jarilla (Larrea divaricata and Larrea cuneifolia), Retama (Bulnesia retama), and Chañar (Geoffroea decorticans).

FAUNA
The native animals have mostly been displaced by the urban progress.
Urban birds: Some native birds have adapted to the city, such as the hummingbirds.
The most striking ones are the species that have learned to live in a city such as: Chingolos, Pititorras, Golondrinas, Benteveos, Torcazas and Colibiries. In addition, the spot-winged pigeons and sparrows (a European species) are also found in most areas of the Department.

HYDROGRAPHY
The Department has no permanent natural channels, with only a network of creeks and streams that remain dry most of the year. These courses acquire great significance during the floods (when there are torrential rains in the Front Range at the Andes Mountain) and are characterized by unprecedented violence of the current, capable of carrying tons of rocks, sand and silt. These materials are deposited in irrigation channels and drains, obstructing and causing them to over flow and thereby causing floods.

Channels:
The zanjones Frias and Maure act as Departmental boundaries and are essential to defend the city against floods. The water supply is carried out through the channels Cacique Guaymallén, Jarillal and Civit, which run through the Department from south to north and bring the vital element from the river Mendoza.