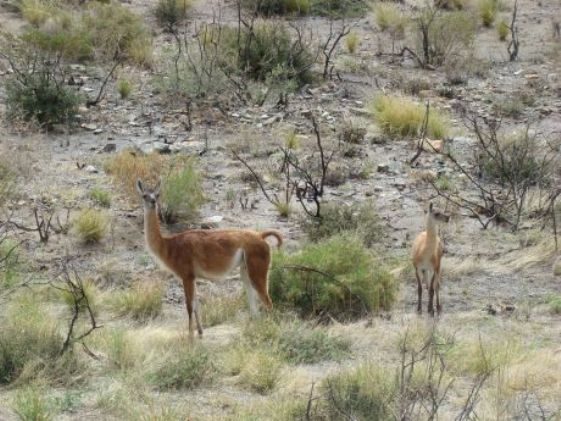 FLORA
Indigenous flora: On the outskirts of the city of Mendoza there are examples of native flora which are adapted to arid conditions, such as: jarilla (Larrea divaricada, Larrea cuneifolia), jarillila (Gochnatia glutinosa), algarrobo dulce (Prosopis flexuosa) and thyme (Acantholippia seriphioides)

Flora introduced by mankind: The woods city
Within the territory of the city itself, the native species are scarce; instead, the landscape is dominated by groves and shrubs especially planted. Therefore, and in contrast to the arid desert that surrounds it, the city of Mendoza is noted for its rich wooded public areas. Among the most widespread forest species in Mendoza, there are Poplar, Platanus, Mulberry, Russian Olive, Elm, Ash, Linden, Acacia, and others. Excluding the specimen planted at the San Martín Park, Mendoza capital has an estimated number of approximately 50,000 trees all through its public areas.

FAUNA
Urban Birds: The most striking aspect of the capital fauna are the species of birds that have adapted to living in a city environment. Among the species attracted by the green spaces in the city there are Chingola, Pititorras, Golondrinas, Benteveos, Torcazas and Colibríes. Spot-winged pigeons and sparrows (a European species) are very successful and swarm around the city, including between the buildings.

Other species: In the dark and damp sections of the acéquias (canals) or in some green spaces, it is possible to find different species of amphibians. In addition, it is also common to find some Crustaceans such as the pill bugs and some insects common to urban areas.

HYDROGRAPHY
There are no rivers, streams and other waterways within the territory of the Capital. However, there are “dry” channels, temporary streams or “uadis” which are filled when there is a torrential rain in the foothills and in the Front Range of the Andes Mountains, as it often does in summer. On these occasions, the volume flow rate is surprising due to its violence and sometimes it gets out of control, causing floods that affect the city and the surrounding areas.

Artificial irrigation:
The derivation of the flow of the Mendoza rivers by canals, irrigation ditches and acéquias dates from pre-Hispanic times and is the hub of the development of the Mendoza city. The Spaniards took advantage of the existing irrigation pattern and adapted it to their needs through Arab and Latin techniques for controlling water. It is notable that the acéquias and ditches were built by exploiting the natural features of the area (faults, slopes, alluvial channels, etc.).
On those bases, settlers created a system of straight ditches and canals, adapted to the grid of the city. In that way, the city was supplied with water for irrigation and consumption (though the latter increased the risk of epidemics). The misuse of irrigation channels and lack of hygiene made them be detested by some sectors in the nineteenth century, but gradually its use was restricted to the irrigation of public trees, thanks to the installation of sewers, drains and drinking water networks.
Nowadays, the canals are a much appreciated element of the landscape in Mendoza.