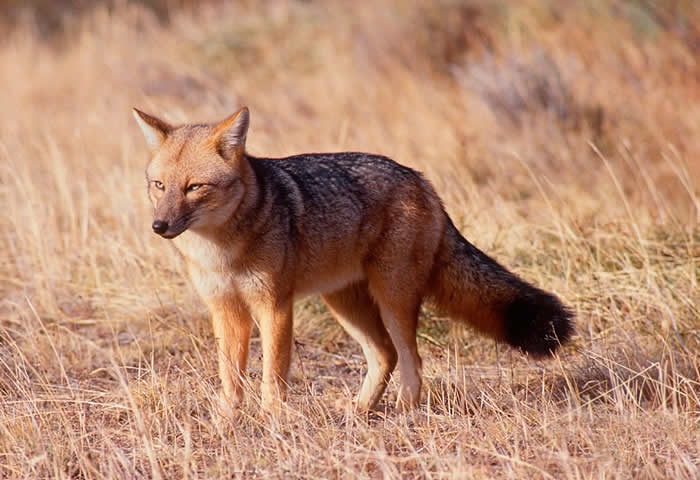 FLORA
Due to the scarcity of water, Luján de Cuyo most of the flora is xerophytic (drought-resistant) or halophilic (growing in saline soils). The physiognomy of the vegetation changes depending on altitude.

FAUNA
• High Mountain Animals (Front and Main Ranges): These are species adapted to extreme cold and shortage of oxygen: birds such as the Andean condor, the grey-breasted seedsnipe, the white-winged cinclodes, the creamy-rumped miner, the buff-necked ibis and the thick-billed siskin; mountain mammals like the puma, the red fox, the chinchilla rat and the Andes mouse.

• Animals of the Foothills (between the Andean area and the Eastern Plains): There is good species diversity, though the number of specimens is somewhat limited given the strong pressure of mankind on this environment. Among birds, there can be found rheas, black-chested buzzard eagle, red-backed hawk, the American kestrel, owl, chimango caracara, South America caracarás, sandy gallito, white-throated cachalote, vultures, elegant crested tinamu, long-tailed meadowlark, white-crested elaenia, chalked-browed mockingbird, monk parakeet and pigeons. There can also be found mammals such as pichi, field mice and Patagonian maras (Patagonian hares).

HIDROGRAPHY
The northern boundary of the Department of Luján de Cuyo is determined by the Mendoza River. This river is born from the confluence of three different Andean rivers: the Las Cuevas, the Tupungato and the Las Vacas. More than three-quarters of the flow of the Mendoza River comes from the three rivers mentioned; the rest comes from secondary streams and creeks, which also come from the Main and Front Range of the Mendoza Andes Mountain.

Dams and Reservoirs
The Potrerillos Dam: It is a very large water mirror, established to regulate the flow of the Mendoza River and provide hydroelectric power to the region. In addition, it offers the possibility of practicing water sports and contributes to the prosperity of the region, promoting tourism.
The Carrizal dam: It is a water mirror shared by the Departments of Luján and Rivadavia. It is highly appreciated by the people from Mendoza, being ideal for camping, fishing and practicing water sports.
The Cippolletti Dam: Dating from the 1880s, it is the work of the engineer Cesar Cippolletti. It is a great water diverter and a cornerstone of the irrigation of the Department, since its inception has contributed to the economic development of Luján de Cuyo. Through the Cippolletti Dam, the water from the Mendoza River is used for the artificial irrigation.