You are here: Mendoza » History of the Vine in the old world » France 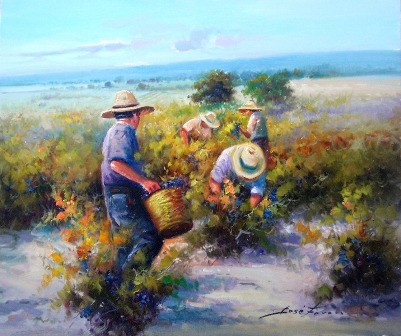 The growing of grapes in France is the result of the Roman influence in Gaul. Julius Caesar, for the Gaullist tradition, not only a great military man was regarded as the father of the vineyards. Because in his memoirs, Julius Caesar said that as he ventured into the French territory, in his fights against the Gauls, he noted that those tribes where the livelihood was based on agriculture, the owners left the houses. However, those who had vineyards held on to the vines by their fingernails.
Therefore, he learnt that the cultivation of the vine should be promoted to entrench the people and have them defend the conquered places.
That tradition of wine from France was transferred to Spain and after that to the Americas. Especially in Spain, the wine was used and it was negotiated as a bargaining tool. It was even said that in due course Andalusia was a true sea of wine. Consequently, from the ports of Andalusia departed the caravels to the Americas, the most important plant species were taken with them, among which there were the olive and fig trees, as well as vines. These aspects should be added that sailors were accompanied by priests, who required wine for celebrating mass.

According to what is said, initially cuttings of vines were transported and they would dry out or sprout during the trip, and it was very difficult to take them to the New Continent. The first plantations were made on the island of Santo Domingo, but the habitat was very negative, so the crops did not flourish.
That is the reason it is believed that the origin of vines in the Southernmost regions arouse with the arrival of Spanish soldiers to the area, who used to carry raisins, which constituted a highly energetic food for them with a special value and, at the same time, were very light and occupied little space.

It is estimated that the first vines sprang from seeds, although naturally they never reproduce themselves from the parent plants, because when it happens a degenerative process begins. This might also explain why the American vines presented features unknown at that time and would be the origin of the Creole vines.