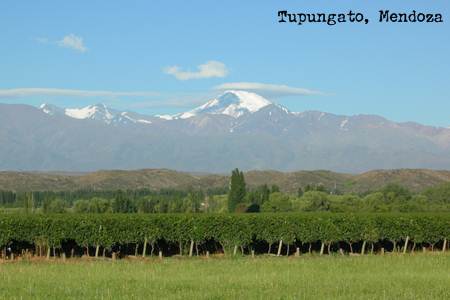 The Department of Tupungato is located in the central western portion of the Mendoza Province, 78 kilometres from the Capital City. It is also part of the Uco Valley, along with the Departments of Tunuyán and San Carlos. Bordered in the west and north by the Department of Lujan de Cuyo, in the east by the Department of Rivadavia, in the south and west by the Department of Tunuyán, and it is also bordered in the west by the Republic of Chile. It is divided into thirteen districts: Ciudad (head village), Anchoris, Cordón del Plata, El Peral, El Zampal, El Zampalito, Gualtallary, La Arboleda, La Carrera, San José, Santa Clara, Villa Bastías and Zapata. Among them the oldest is La Arboleda, which once was the first settling place for political delegates. The name Tupungato has several meanings, but the most popular is “Viewpoint for the stars.” The topography is formed by the Cordillera de Los Andes, the Front-and Main mountain ranges, the foothills and the alluvial plain. There should be highlighted the Tupungato Volcano with 6800 metres, which was newly formed, in the Cenozoic era, Tertiary period.

The fauna of Tupungato is determined by the arid climate and altitude, and is represented by guanacos, rheas (popularly known as choique), varieties of ducks, herons, partridges, martinetas, tunduques, lizards, snakes, weasels, foxes, mountain lions, among others. Within the group of birds there are condors, eagles, chimangos, chiriguas doradas, and chingola, and among the fish that abound in rivers and streams, the trout should be highlighted. In addition, there are other species introduced by man to satisfy their needs for food and transportation such as cattle, sheep, horses, mules and goats. On the other hand, the flora is represented by xerophilous vegetation, which grows in low altitude with highly developed and extensive roots to search for water, leaves replaced by fleshy thorns and stems to accumulate great amounts of water. Such vegetables use the summer rains for the growing and reproductive processes.

The Department presents snowy cold weather in altitudes of about 4200 metres above the sea level; this snow is the main water resource. Approximately 1000 metres downwards, the weather is arid and mountainous, with major thermal amplitudes. And in the oasis, it is arid, typical of lower mountains and fields, with relatively hot summers and cold winters. The winds are generally of a low intensity, only altered by the Zonda wind, characteristic for being strong, dry and hot.