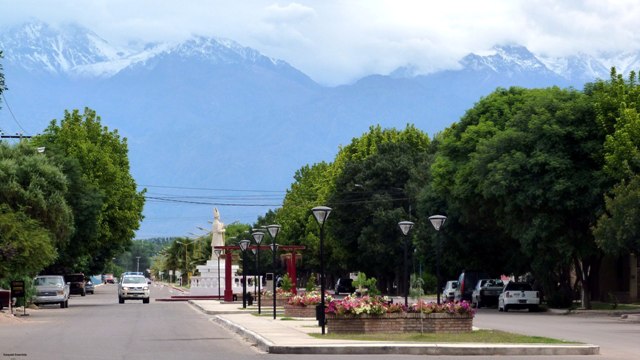 The Department of San Carlos is located in the centre west of the Mendoza province, 106 kilometres from the Capital City. It is divided into five districts: San Carlos (head city), Eugenio Bustos, Chilecito, La Consulta and Pareditas. It also holds the important villages of Cápiz, Calise, Casas Viejas, Tres Esquinas, Paso de Las Carretas, El Cepillo, Villa Chacon and El Capacho.
It is bordered in the north-west and north by Tunuyán and Rivadavia, in the south by San Rafael, in the east by Santa Rosa and in the west by the Republic of Chile.
Alongside, Tunuyán and Tupungato, form the region known as Valle de Uco or Depresión de los Huarpes.
Its semi-arid climate with extreme temperatures both in the winter and summer, with warm days and cold nights during the spring and autumn, is determined among other factors, by low rainfall – 300 millimetres annually – predominantly in the spring and summer.

San Carlos presents high mountains in the west (Main Range and Front Range), plains or central depression (Depresión de los Huarpes) where the main urban centres are located and eastward Huayquerías (high plains) and the Llanura de la Travesía (basin cover with sediment where there are groups of dunes).

Its economy is based on tourism and agro-industrial activities, the winemaking, with internationally renowned wines produced in the area, the quality apple production and aromatic herbs for export should be emphasised.

Its population is well informed and aware of the activity which not only pollutes but also dries water resources and diminishes national metal, has taken preventive measures against mining. Activity already done in other parts of Argentina by companies interested in settling up in San Carlos. The population nowadays has the protection of provincial laws and municipal policies that protect the natural resource and the community water, defending the current and future quality of life.