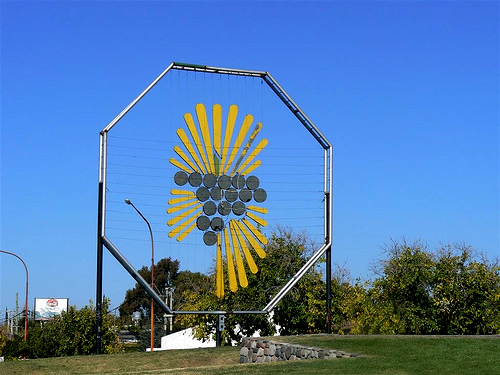 The Department of San Rafael is located in the south of the Province of Mendoza, 232 kilometres from the Capital City. It is limited in the north by the departments of San Carlos, Santa Rosa and La Paz, in the south by the department of Malargüe and the Province of Pampas, in the east by the department of General Alvear and the Province of San Luis, and in the west by the Republic of Chile.
The department is conformed by seventeen districts: City (head village), Cañada Seca, Cuadro Benegas, Cuadro Nacional, El Cerrito, El Nihuil, El Sosneado, Goudge, Jaime Prats, La Llave, Las Malvinas, Las Paredes, Monte Comán, Punta del Agua, Caída, Real del Padre, Villa Atuel, and Villa 25 de Mayo.
San Rafael is the second population centre of the Province of Mendoza, which along with the departments of Malargüe and General Alvear conform the South Zone of the Province, occupying more than half of its territory.
The heterogeneous relief of San Rafael is made up of high summits of the Andes Mountain range (Cerro Sosneado 5169 metres above the sea level) and smaller mountain ranges in the west, and plains and depressions towards the east.
San Rafael is crossed by the Diamante and Atuel rivers. These come from the fusion of the snow at the Mountains and they have characteristics of mountain rivers: great force and aggressiveness in their currents, little depth, sporadic rapids, beds covered with stones, and rocks dragged by their waters. In the course of the Diamante River there are the dams Agua del Toro, Los Reyunos, El Tigre and Compensator Galileo Vitale.
Moreover, in the course of the Atuel River there are the dams El Nihuil and Valle Grande.