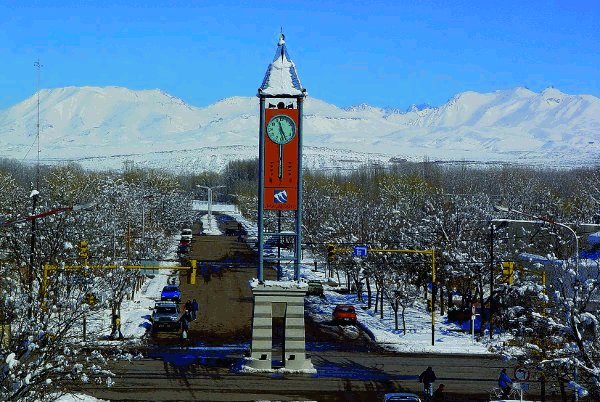 The Department of Malargüe is located in the extreme Southwest portion of the Province of Mendoza, 421 kilometres from the Capital City. It has the greatest surface among the eighteen departments that form the Province and it is limited in the West by the Republic of Chile, in the East by the province of La Pampa, in the South by the province of Neuquén, and in the North and Northeast by the department of San Rafael.
The climate there is characterized by cold winters in the western portion of the department, which is bordered by the Andes Mountain; and in the rest of the territory, it is desert and semi desert. This originates a particular landscape, where there are forests of alpatacos between the dunes, since they are irrigated by rivers and cascades or by the subterranean water.
The volcanic region of Payunia is a set of plateaus and elevated plains of volcanic origin, endorheic river basins, depressions, salt mines and dunes, with basaltic outcrops and little vegetation. It receives the name Payún because of the volcano of 3,680 metres.
The economy of Malargüe is based on the production of goat, potatoes seeds and garlic, and an intense tourist activity.
In Malargüe there is one of the locations of the Observatory Pierre Auger, the other is in Utah, in the United States. It is an international scientific project to discover the origin of ultra-high energy cosmic rays. In this observatory, there will be measured the cascades of particle that appear whenever a cosmic ray hits against molecules of the upper atmosphere. Thus, it will be possible to determine the energy, direction of arrival and the nature of the cosmic rays of the highest observable energies.
In addition, Malargüe has the “Thesaurus” Convention and Exhibition Centre with capacity for a thousand people. It has a total surface of 1500 square metres, divided between a tunnel of entailment and two main bodies.
The name “Malargüe” is a derivation of the Mapuche words “malal” (bards, species of corral which takes advantage of the small elevations of the land surrounded by a cut, where animals used to be locked up) and “hue” (place).