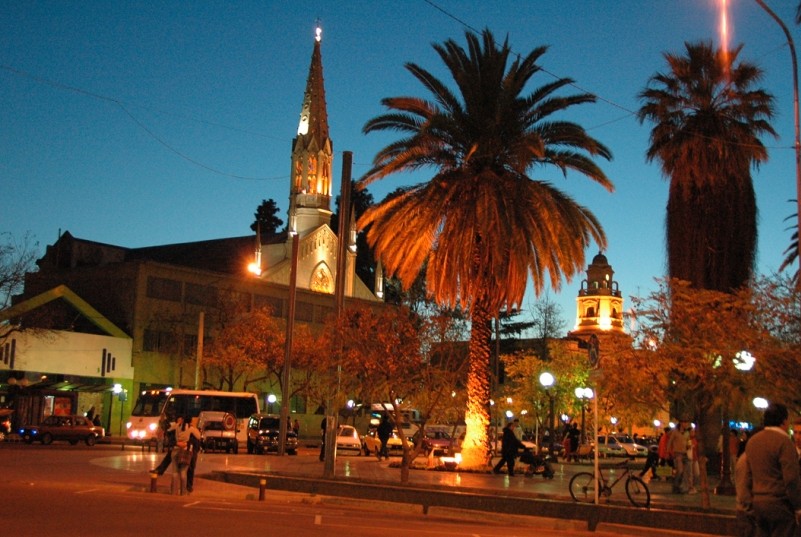 The Department of Godoy Cruz is in the center of the Grand Mendoza, in the Northwestern part of the Province, 4 kilometres from the city of Mendoza.
It is divided into five districts: Godoy Cruz City, San Francisco del Monte, Las Tortugas, Gobernador Benegas and Presidente Sarmiento.
It is limited in the north by the city of Mendoza (provincial capital), in the west and southwest by Las Heras, in the east by Guaymallén and Maipú, and in the south by Lujan.
The land is semi-arid and the irrigation water comes from the rainfall and the ice melting from the mountain, brought by large regional rivers and is channelled through the canals Jarillal, Civit, Canal del Oeste and Cacique Guaymallén that go through Godoy Cruz from south to north.
It has an absolute maximum temperature that exceeds 42°C; the absolute minimum is -5°C and has an annual average of 16°C.
The rainfalls reach 219.7 mm annually. The winds that reach higher average speed are the ones from the North West: the characteristic Zonda of Cuyo wind.
The industrial activity is distinctive in Godoy Cruz, as it concentrates 36% of the activity in the province, with a strategic location due to the routes connecting to the entire country and to Chile.
The concentration market, receiver and distributor of fruits and vegetables and the dry port, customs primary zone, are in the industrial zone. The dry port concentrates the export-import operations by land, and the commercial trade among the countries that form the Mercosul bloc.