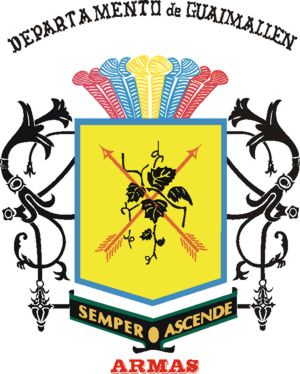 Guaymallén is located six kilometres from the City of MendozMendozas limited in the north by the departments of Las Heras and Lavalle, in the west by Capital and Godoy Cruz, and in the southeast by Maipú.
It presents a very different population density in its 20 districts, being those of greater percentage the ones on the west, the ones that are near the capital city of Mendoza.
Those districts are Dorrego, San José, Pedro Molina, El Bermejo, Belgrano, Buena Nueva, Nueva Ciudad, Villa Nueva, Las Cañas, San Francisco del Monte, Jesús Nazareno, Rodeo de la Cruz, El Sauce, Colonia Segovia, Los Corralitos, Kilómetro 11, Kilómetro 8, Capilla del Rosario, La Primavera, and Puente de Hierro.

It is a complex department with urban residential zones; in general, with low constructions and with a low population density, although it also has high buildings and areas with high population density, there are also semi rural areas and agricultural zones.
Its economy is based mainly on the agro-alimentary industry, with the advantage of being near the small farms and vineyards, and the presence of fluid routes of communication between the local, national and foreign consumption centres.

It has two freeways: the South Access, that connects the City of Mendoza to the provincial south, and the East Access, that connects it with Buenos Aires, the Capital of Argentina, and with the rest of the country.
In the intersection of these two accesses, in the year 1980 was celebrated the mass of culmination of the National Mariano Year, with the presence, for first and only time, of the Pope Juan Pablo II in Mendoza. A sculpture of a silhouette of monumental proportions dedicated to the Virgin Maria remembers that event.

In the 90’s, the installation of several chains of supermarkets and a modern shopping center, has diversified the supply of services of the Department and constitute a reason for local pride.