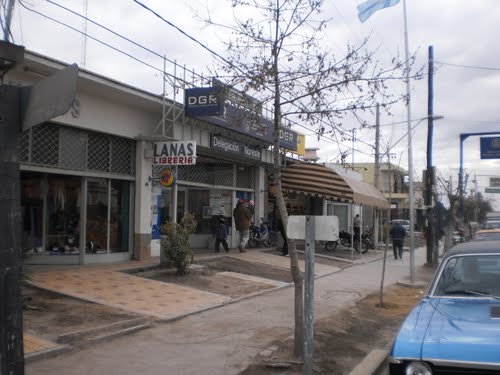 It is limited in the north by the streets Buena Nueva, Buenos Vecinos, Lillo alley, Milagro, and Ferrari, in the east the Tulumaya Canal, in the south by Paladini, and Godoy Cruz, and in the west by the General Belgrano railroad.
With an area of 26.31 square kilometres and a population of 7723 inhabitants, its population density is 294 inhabitants per square kilometre.
There are three schools, a police station, and a center health.
The district is in the rural area and its activities are related to the crops of garlic, and vegetables. There is the appropriate equipment for the development of its inhabitants.
The Carril to Lavalle and Severo del Castillo are routes of fast circulation and connect this departmental to the others. The district has an important road network composed by main routes: Milagros, Infanta Isabel, and Godoy Cruz. The secondary routes are Milagros, Durán, and Ferrari.
History: This area used to be a natural boggy pasture zone where in the properties the cattle would run free mixed with the crops. In order to separate them, small corrals started to be built. The great number of the latter gave the name of “Los Corralitos” to the area. Once the cattle were separated, the farms were transferred to the different rodeos.

It is limited in the north by the Godoy Cruz Street, in the east by Escorihuela Street, in the south by the San Francisco del Monte Street, and in the west by the streets Concordia, Milagros, and the General San Martin railroad.
With an area of 8.49 square kilometres and a population of 4839 inhabitants, its population density is 570 inhabitants per square kilometre.
There are three schools, and a police station, however, there are neither hospitals nor health centres.
The district of Kilometre 11 was developed between the urban and rural areas, and that is why there can be seen a diversification of activities, being those to support to the housing as well as the farming, and agro-industrial activities.
This District has the following main routes: Godoy Cruz, Bandera de los Andes, and as inter-departmental routes: Buenos Vecinos and Kilometre 11 Streets.
In one side of the main square, there still remains the building of a Municipal farmyard from the beginning of the last century.

It is limited in the east by the El Sauce stream, in the south by Bandera de los Andes Street, in the west by Escorihuela, and in the north by Argumedo.
With an area of 12.97 square kilometres and a population of 2815 inhabitants, its population density is 217 inhabitants per square kilometre.
There are three schools, and a micro-hospital, however there are neither a police department nor a police station.

Its population is eminently rural and dedicated to the crop of vegetables and flowers, since the land is very fertile there. The district has a road network composed by main routes that cross it from the west to the east, such as the Bandera de los Andes Street. Its secondary route is Argumedo.

History: There the Bioplanta Km.8 stands out, depending on the Institute of Health and Farming Quality of Mendoza (ISCAMEN), which works for the elimination of the Mediterranean fly, producing sterile insects that later on are released on the ground and in the air. When those sterile flies mate with the fertile ones, they cut the biological cycle preventing their reproduction.