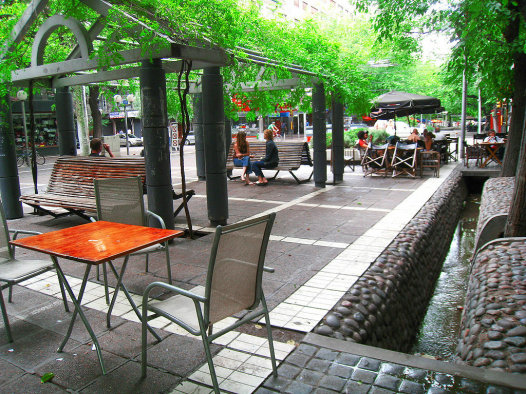 In the year 1863, the City is rebuilt, and the Plaza Independencia is designed as the downtown area, along with four other equally distant squares: Plaza España, Plaza San Martín, Plaza Chile and Plaza Italia. This area concentrates pretty much all the business of the city, it is delimitated by San Martín Avenue and Las Heras Avenue; these are the main commercial axes of our city.

*The Pasaje San Martín
Opened in 1926 was built by the decision of the Spanish viticulturist Miguel Escorihuela Gascon, with a splendid architecture and exceptional stained glass, brought from France.

*The Arts and Crafts Market
In this market located at 1133 San Martin Avenue there are leather items, loom pieces and pottery made by artisans in the province, to be seen or purchased.

*The Former Mortgage Bank
This magnificent building, now the Ministry of Tourism and Culture of the Province of Mendoza, invites you to stop to admire its facade with a Neoplateresco style, with columns marked by mythological stories.

*The Sarmiento Pedestrian Street
The Pedestrian is the ideal excuse for meeting friends, enjoying the sun, having some coffee and some bands playing live music.

*The Museum of the Cuyano Past
The house belonged to the former governor Francisco Civit, who lived there until 1873. In 1961, it was donated to the Board of Historical Studies. The museum shows collection of weapons from the time of the Independence. It was declared a National Historical Monument in 1971. There is also the largest library specialising in the history of Mendoza and a comprehensive collection of copies from the Mendocinean newspapers edited since 1820.

*The Las Heras Avenue
This has always been the street of tourists since the days of the railroad, whose tracks would work as a limit. It is a street of a commercial nature, which exhibits arts and crafts and especially regional products.

*The Central Market
It is the oldest shopping center of Mendoza. Its construction dates back to 1884. Besides the traditional fruits, meat, and other shops, it has a nice food court with different culinary proposals.

*The Basilica of St. Francis
In the Basilica of great architectural value (Neoclassicism French), there are treasured remains of Merceditas of San Martín, the daughter of the General and her husband Mariano Balcarce. Declared a National Historic Monument in 1929, keeps the image of Nuestra Señora del Carmen de Cuyo, appointed as the Patron Saint of the Army in 1817 by General San Martín, as well as the centre of leadership that the General himself granted her.

*The Arístides Villanueva Avenue
It concentrates the nightlife of pubs, cafes and restobares (a combination of a bar and a restaurant). It is a former residential street that has been recycled due to the demand of young people who have adopted it, spontaneously, as their meeting place and recreation point.

*Plaza San Martín
At its centre there is the archetypal statue of the distinctive general. This statue was based on the original, made by the sculptor Jose Luis Daumas, which is in the homonymous square in Buenos Aires.
All around this square there is a concentration of banks.

*Plaza Italy
A large green area for your relaxation. Its central monument recalls episodes of the legendary founding of Rome.

*Plaza Chile
Its central monument serves as a solid platform to a colossal sculpture (carved in a single 22-ton block) which will make the meeting of the General San Martin and O’Higgins last forever, symbolizing the profound relationship between the Chilean and Argentine people.

*Plaza España
Built with majolica, fountains, trees, and arts and crafts. Its mural of painted pottery, recalls the origins of the American civilization, where the founder Pedro del Castillo and scenes from Don Quixote intersect each other and the Martín Fierro.

*Plaza Independencia
It comprises four blocks of woods, bronzes and water fountains. In it, there are the Museum of Modern Art, the Theatre “Julio Quintanilla” and “the Plaza de las Artes” (arts and crafts fair).
All around there area there are traditional construction of public importance, such as the Provincial Legislature, the National College, the Independence Theatre, as well as the Park Hyatt Hotel with its Regency Casino.