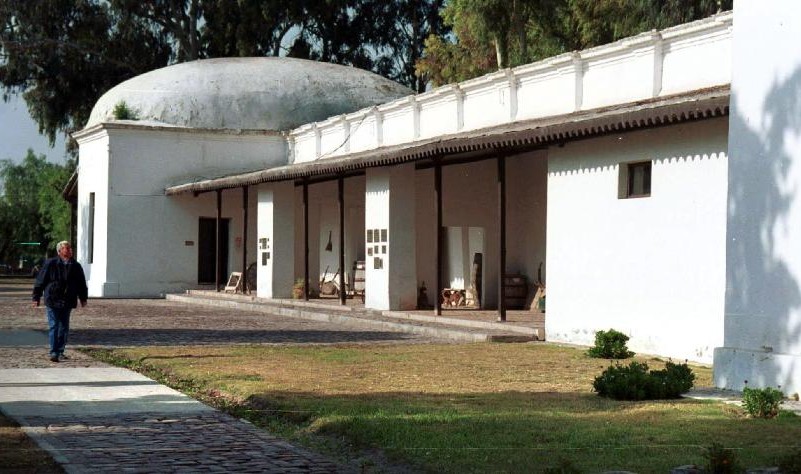 • Solar Histórico and Museo Histórico Regional Las Bóvedas.
Declared a National Historic Site in 1941, is a reconstruction of the house in which General San Martín had wanted to spend his last days as an ordinary neighbour of the Department; the original house was destroyed by the weather and the earthquakes. The name of the museum is due to its two white domes built with wood, mud and reeds. The current building dates from 1905 and displays objects and agricultural machines of the nineteenth and early twentieth centuries, besides nostalgic belongings of the Liberator, as well as artefacts of the war against Paraguay and the Desert Campaign, and folklore, archaeological and religious objects.
Location: Av. Pirovano and Godoy Cruz. Tel: (02623) 428-987

• Chapel “Oratorio de Alto Salvador” and Museum Aragón.
It was founded in the mid-nineteenth century by the Franciscan priest Fray Antonio Aragón, in the former village that hosted carriages and mules named “El alto de la Esperanza”.
The architectural ensemble consists of a closed chapel (Oratorio), an open chapel, whose gallery has a wooden pulpit from where the priest used to give his sermon to the devotees; an attached house and a bell house – Mangrullo. The complex expresses a successful integration into the agricultural surrounding landscape.
It has a lookout tower built in 1845 with wood, at that time used to watch from the top, at a great distance, the movements of the carriages. The farm is owned by the Arnal family, and is located in the district of Alto Salvador, 7 kilometres from the city of San Martín, in a northerly direction by Costa Canal Montecaseros (RP No. 43), taking the Cereceto Street up to Calle Oratorio. The chapel is on Calle Oratorio, 700 metres from De Cereceto.
It has been declared a National Historic Monument.

• Capilla del Buen Orden.
It is located near the head city in the District of “Buen Orden.”
There, a Chapel keeps the charm and sweetness of the last century; it is on the Carril Buen Orden and Carril Norte, northwest of the city.
The chapel nowadays stands out as a testimony of our past in the serenity of the Mendoza landscape. It has a long shape, approximately thirty-two metres lengthwise, including a vast atrium of eight metres which can be accessed by the central stairs. It presents a facade with reminiscent of colonial times.
Even though we do not know the exact date when the works were completed, it is supposed to have been completed in the eighties of the last century.