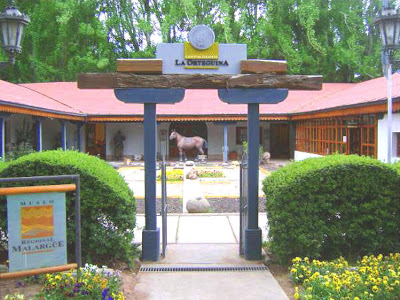 • Observatory “Pierre Auger”
It is a multinational scientific project, set up to trace the origins of ultra-high energy cosmic rays. There are participating representatives from over 50 institutions from 15 countries. It lies east from the Dirección de Turismo, across from the Regional Museum. It can be visited every day. Website: www.auger.org.ar

• Museo Regional de Malargüe
It is an institution of a high scientific and historical interest, divided into four chambers. There are mineralogical and palaeontological, archaeological specimens and historical artefacts. It is open to the public from Tuesday to Sunday, all year. Address: Route 40 North, city of Malargüe. Tel: (02627) 470-369

• Monumento Histórico Nacional “Molino de Rufino Ortega”
This is a construction of adobe and wood which dates from 1876. Along with other buildings in the area, it is part of what used to be the main structures of the “La Orteguina” farm. In this mill there used to be processed the wheat grown the previous year in Malargüe and not only that: it was one of the first large-scale hydraulic milling establishments working in our country. Address: Centro Cultural and Sports Centre “Malal Hue,” Capdevila and E. Aldao streets.

• Monumento Histórico “El Fortín”
This fort was built with volcanic rock with the help of Cacique Frey Pan, under the orders of Captain Juan Troncoso, in the mid-nineteenth century. It is a typical fort of the era. In it once hid the staff of the First Desert Expedition. It can be visited throughout the year. Address: right side of Route 40, about 12 km south of the city.