History of the Harvest Festival 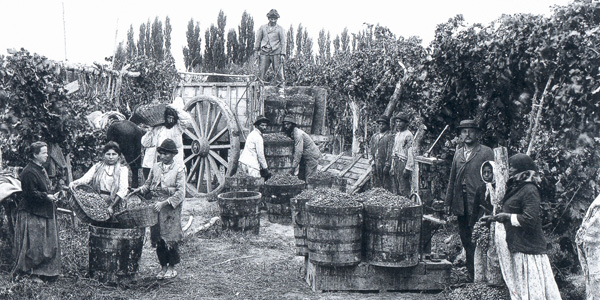 The Fiesta de la Vendimia is perhaps the first link that weaves the wine and the tourism. It was born great, but continued to grow until it reached the present dimensions.

The Harvest is the image of the essence of the Mendocinean work and has been receiving over the time the feelings of the men for their land and the emotion of receiving its fruits. It is the symbol of the farmers’ work, who receive their prize in fruit for their efforts, which will have new life in the body and the spirit of the good wine.

In 1913, a first attempt to make a harvest festival was drawn on April 11, when a congress of the industry and commerce carried out ended with the harvest parade of floats and allegorical chariots. An especially vines decorated train, was the bearer of 800 guests who toured areas of vineyards and wineries.

Thus, through the initiative of a precursor of Spanish origin, Jose Diaz Trianez was done for the first time, the Fiesta de la Vendimia outside the realm of the intimate rows since in the previous century since the workers used to celebrate the end of the harvest by playing the guitar, singing and dancing Cuyanas cuecas and gatos. In addition, they would choose a girl among the harvesters that was crowned with clusters of grapes. The month chosen for this first festival in the city was April, when started the first parade of beautiful carriages. There was a long period of 33 years when this event was not held, but the memory, the people’s desire and action of visionary officials as Don Guillermo Cano and Frank Romero Day, allowed in 1936, a provincial decree to institutionalise the first Fiesta Vendimial, the gymnastics and fencing stadium at the opening evening sheltered 25,000 people. There was elected the first Queen of the Harvest, Delia Larriva Escudero, the representative of Godoy Cruz.

The following year, a competition to create the traditional march of Harvest was established. Ernesto Fluixá received the first prize and then the designing of floats for the parade through the streets of the park began. That harvest carousel prefigured the current parades. For the first time, admission to attend the show were sold and hundreds of fireworks were launched into the sky. The central show and the carousel were complemented by a parade of gondolas in the Lake at the Park. The second harvest Queen was elected, Elia Rico.
In ’38, the stage is changed in order to offer more space for the public. The site chosen was the roundabout of General San Martin Park.

But, 1939 is the year of the major innovations: for the first time there was the Blessing of the Fruit, using the scenario of the Park. It represented a great cathedral and for the first time the stage was decorated. The tradition established in 1936 was abandoned; when chosen, the queen had to give the order to start the celebrations. The election and coronation of the Queen became the closing of the night. For the first time, the Carousel entered the city.

Under the name of the Corsican floats, was born what in the future would be known as Via Blanca de Las Reinas. The liturgical symbols reflecting the celebrations were completed. The image of the Virgin of Carrodilla was transported to the proscenium to preside over the acts of the Blessing of the Fruit.

In 1940, a floating stage was installed inside the Lake at the General San Martin Park, having the presence of 250 artists and the classic parade of gondolas. After the events, the organizers saw the need for more space to accommodate the public, which had increased steadily, and the incorporation of lights as a matter of special attraction.
In 1943, it was decided to return to the stage of the roundabout to offer, for the first time, an argumentative raster of the Vendimia history. In’44, an official march was adopted. The chosen one was Canto a Mendoza, wich was first recorder by Francisco Canaro, with the voice of Hugo del Carril.
But, back in ’63, the festival reached its definite stage: it was moved to the Greek Theatre and thus begins the expansion into the hills to the sound and light shows.

The Festival as we have said, was born big but grew in form and content. The choice of the harvest sovereign is a tribute to the sacrificed work of the women in the groove. The queen will become a true ambassador of Mendoza, with the mission of spreading the virtues of its people and the beauty of its land.

The staging of the Fiesta Nacional de la Vendimia requires a large deployment. According to those responsible for each festival, the scenery covers 3.000m² and uses 25,000 lights bulbs, 3,500 plates of plaiwood, 2.500m² of wood, 4,000 costumes between dancers, actors and extras, 500 kg. of fireworks, and nearly 1,000 people in total, among those are the ones that go to the stage, the ones who are in command of the lights, sound and choreography, the queens and their courts.

Thus, the Festival of the Harvest has become, like a good wine, a celebration with its own spirit, in the best way to be a lasting creation.