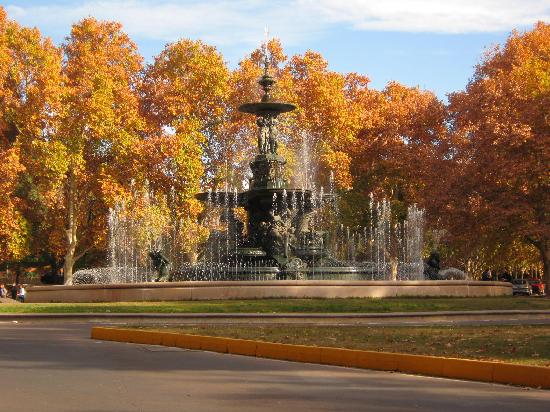 The green lung of the city, with its 500 hectares, it is worth going for a walk and enjoy a day outdoors. It was created in 1896 under the name West Park, by the landscape architect Charles Thays.
Its main attractions are:

*Los Portones
They were ordered in the early years of the twentieth century by the Sultan Red of Turkey to a Scottish cast. After his overthrow, the majestic gates were abandoned and were purchased in 1907 by the Government of Mendoza to create a frame to the main access of San Martín Park.

*Caballitos de Marly
They are an exact replica of those that are at the Place de la Concorde in Paris, made in Carrara marble.

*Fuente de los Continentes
It was attributed to the legendary sculptor Lola Mora. It was inspired by the sculptural collection “The Four Continents” of the French Jean B. Carpeaux that adorns the Luxembourg Gardens.

*The Lake
It is more than a thousand metres long and a hundred metres wide, this artificial lake, is usually the scene of several nautical competitions. It also has an island accessible by a small bridge.

*The Rosedal
It consists of nearly five hundred species of roses and pergolas.

*Club Mendoza de Regatas
It was created in 1909 with a typical English architectural style, there are multiple sport activities. It is located on the shores of the lake, towards its jetties and its terraces, where there is also a restaurant with an excellent cuisine.

*The Natural Science Museum
The museum “John Cornelius Moyano” occupies the same building as the old spa “Playas Serranas” across from the Lake. There are over forty thousand specimens in their sections of Mineralogy, Palaeontology, Anthropology, Ethnology, Archaeology and Zoology in exhibition.

*The Aboriginal Park
It is a unique sample of the native flora, where there is a striking variety of cacti.
This is what the entire territory of Mendoza used to look like when the Spanish arrived in the sixteenth century.

*The Mundialista Stadium
The stadium “Malvinas Argentinas” was built to be co-host of the World Cup in the year 1978. It has been used, since 1994, to summer football tournaments and for many artistic performances.

*Cerro de la Gloria
There is the monument to the Army of the Andes, the work of the Uruguayan sculptor Juan M. Ferrari, inaugurated in 1914. The base of the monument is made of stones suggesting a craggy peak. It is a tribute to the General San Martín and the Army of the Andes. The esplanade of the hill is also a splendid stall to observe the city, day and night, in its entire extension.

*The Greek Theatre Frank Romero Day
It was created in 1940 by the architect Daniel Ramos Correa. It lies between the hills and where the Feast of the Harvest takes place every year. It has the capacity for up to 22,500-seated spectators.

*The Challao
There, at the foot of the Cordon de Las Lajas (only 8 km from the city), stands the shrine of Our Lady of Lourdes visited by many devotees. In addition, in the area there is a drive in movie, some campsites and nightclubs. There are also swimming pools of thermal waters at 900 metres above sea level.

*Reserva Divisadero Largo
This is a 492-hectare Nature Reservation; it is a circuit of ecotourism. It shows a huayquerías landscape, where it is possible to observe a remarkable geological fault. Its movement has allowed the outcrops of rocks rich in fossils of up to 230 million years. There are interpretation footpaths.

*Circuit Papagallo
This is a mountain ranch which offers exceptional conditions for the practice of mountain biking and motocross.
It is one of the key points to have beautiful panoramic views of the city.

*The Zoo
It is one of the most important of South America. It was developed on a slope of Cerro de la Gloria. The zoo was built on the slopes taking advantage of the natural shape of the terrain and the native flora, suggesting a wild area. In its 50 hectares, there are 68 species of mammals and 78 species of birds (more than 1000 specimens in total).