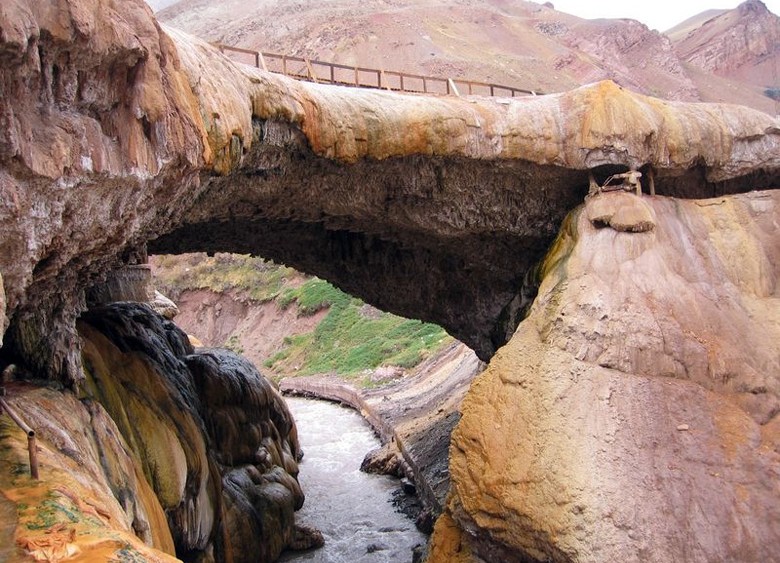 Inca Bridge (Puente del Inca) is a geological formation that carries an interesting story. Its name refers to the views that indigenous peoples of the Inca culture carried to the bridge, under which ran hot springs with healing properties. It is located 180 km from Mendoza, in the district of Las Cuevas, and is accessed through National Route 7. It is about 50 meters long and 28 wide, and is suspended 27 meters above the river.

By all accounts, the name comes from the legend of an Inca leader who took his son paralysis affected by the waters of the place, to heal him. He was accompanied by a group of brave warriors. Upon arrival, they saw water between them a rushing river. The soldiers formed a human bridge clinging together, and the head went through his back. Legend has it that as he turned, the warriors were petrified, forming the Puente del Inca.

The scientific explanation is that the bridge was formed by the action of mineral waters. Over the years, the river flow passage between sediments that were deposited at the bottom of a trough opened. Then it was cemented by the hot springs, which gave him a coloring oranges, yellows and browns. Anything that is placed under water hardness acquire, thanks to the mineral action that gives them an appearance “petrified”.
In the area are located the remains of a hotel, the Hotel Puente del Inca, which was built in 1925. Due to weather contingencies Hotel was deteriorating, but was finally destroyed in the flood of 1965. Its ruins are still visited by thousands of tourists.