You are here: Mendoza » Wine regions of Argentina » Midwest Region 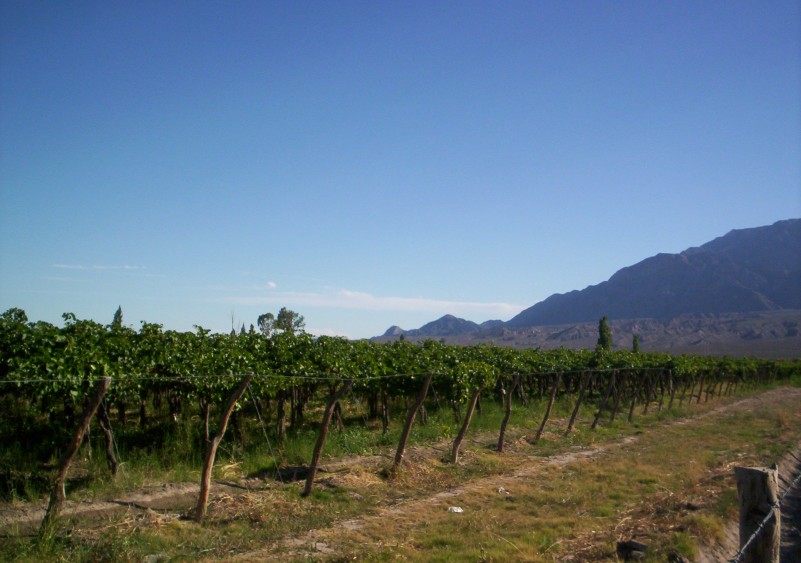 It is considered the most important wine region. Its territory is divided between the so-called Sanjuaninos valleys and the five oases of Mendoza that are described in a separate section. To learn about them, enter in www.mendoza.travel/en/sus-oasis/ .
The clusters coloured themselves between 500 and 1,165 metres. The low relative humidity and little precipitation rate (between 100 and 350 mm / year) protects the vines from fungal diseases. Bellow are detailed the principal features that characterized the San Juan valleys:

The San Juan terroir is located in the fertile valleys irrigated by the rivers Jachal and San Juan.More than 46,000 hectares of vineyards are cultivated in the province and they produce their fruits in the oasis such as the Valle de Tulum, the Valle de Jachal, Calingasta, Iglesia, the Valle del Zonda, Valle de Ullum and Valle del Perdénal, with maximum heights of 1,165 metres above the sea level. The summer temperatures are very high, sometimes reaching 45º C, which influences the production of generous and liquorish wines. The soils of the region can be differentiated very simply: those at the Eastern margins of rivers are sand-clay, very fertile and with little depth. On the Western shores are the ones best suited for growing grapes, stony and accompanied by clay sediments.
The valleys located at higher elevations provide cooler summers, with extreme temperature conditions ideal for growing varieties for the production of fine wines. This is true for the valleys of Calingasta and Jáchal, which have their production focused on the Torrontés Riojano, Muscatel of Alexandria, Torrontés Sanjuanino and Bonarda. Large areas have been implanted with vine varieties for fresh consumption fresh and for the production of raisins, among them standout the varieties Cherry, Sultanina and Creole varieties. There should be highlighted that the winemakers and grape growers in the area at this time are going through the path of conversion in winemaking. This fact is evident in the decisive incorporation of technology, improved management culture of the vineyards and the introduction of new acres of quality grapes adapted to agro-ecological environment.
The Province of San Juan is the second largest producer of wine in the country. It received 74,481 visitors in its wineries in 2006. It has 10 wineries open to tourism.