You are here: Mendoza » Wine regions of Argentina » Northwest Region 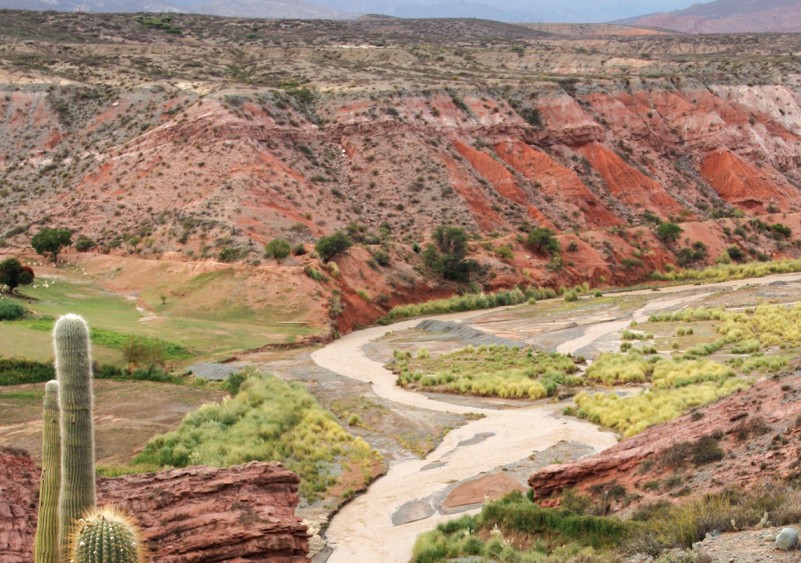 This region comprises the provinces of Salta, Catamarca, La Rioja and Tucumán. The Northwest oasis is located between 22 and 29 degrees of South latitude. The Torrontés is the predominant variety in this area. It includes the following sub-regions:

The wine region of Valles Calchaquíes is located in an area with a geography characterised by the wind and the sun. Located in the Southwest of the province of Salta, it is crossed by the mythical national route 40 (nearly 5,000 km), uniting the villages of Payogasta in the North and Tolombón in the South.
Within the broad geographical biodiversity offered by Salta, the wine region of Valles Calchaquíes is surrounded by mountain ranges of unusual beauty and colour; there are mountain breezes, clear skies and historic towns.
It was in the eighteenth century that the Jesuits planted the first vines, and ever since the valleys started mounting up vineyards and wineries. Its remarkable growth is a result of the high quality of its wines, and now there are more than 3,200 hectares between the departments of Cafayate, San Carlos, Angastaco, Molinos and Cachi.

The advantages of the Valley lie in its location that allows the development of a continental viticulture away from the large water bodies and at altitudes above sea level that moderate the temperature. The Valles Calchaquíes vineyards have higher altitude ranging from 1,750 metres in Cafayate up to 2,700 and 3,015 metres in Molinos and Payogasta.

The climate is arid, dry and mild, with great temperature amplitude that can vary up to 20ºC (68 degrees F) between day and night, favouring the concentration of aromas and ripening. The average period free from frosts is 230 days and the rainfall average is less than 200 mm per annum. More than 300 sunny days per year make possible a better capacity of photosynthesis, which improves productivity. In addition, the winds ensure the health of the vineyards with less probability of diseases due to the low humidity.

Its soils are franc-sandy with good content of potassium from the bedrock, and the low content of phosphorus and nitrogen, with very good permeability that prevents the accumulation of water.

The water is brought mainly from the rivers Calchaquíes and Santa Maria, from the ice melting on the Front Range or from wells.

The oldest and thickest vine trunks can be found in the valleys; on the other hand, in Cachi or Payogasta there are new vineyards.

Different varieties are grown there, especially Cabernet Sauvignon and Malbec, although the most emblematic is the Torrontés, a distinctive white strain among the Argentine wines, being Argentina the only producing country. The origin of this variety is uncertain and discussed; it could possibly have been the result of a mutation of any strain accidentally crossed with wild vines. It was introduced in the Calchaquí Valley, where it acquired its best expression. The Torrontés aromas have floral and plant touches.

The reds on the other hand, are of great structure, high in anthocyanins (intense colour), with mild tannins on the palate, a polyphenols structure (tannins) and with good potential for aging.

The Malbec is the most prevalent strain and characteristic of the Argentine viticulture. Most international experts agree in the definition of the Argentine Malbec as the best in the world. In the Calchaquí Valley, the Malbecs achieve outstanding descriptors due to the height of the vines and these wines can be described as round, aromatic and of intense colour.

The growing areas are flanked by two chains of mountains, the foothills of Famatina in the west and those of Velazco in the east.
The grapes from this region produce wines with high levels of sugar and poor acidity. Forming this way a catalogue of highly aromatic varieties, among them the Torrontés Sanjuanino, the muscatel of Alexandria and Torrontés Riojano, the latter being the variety best suited to the predominant agro-ecological factors.

The history of its main crops goes back to the arrival of the conquistadors, thriving in two microclimates suitable for both: Olive groves in the Arauco and vines in the Valle de Antinaco – Los Colorados, where Chilecito is.
In 2006, there were wineries open to tourism, which were visited by 8,920 tourists.