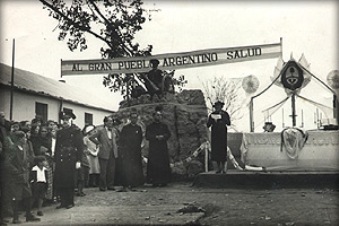 In the sixteenth century, there were the first colonial expeditions, with great difficulty, as the natives constantly opposed to the conquest of the Spanish. Therefore it was necessary to construct fortresses, as the farthest point of occupation and as monitoring lookouts against rebellions or invasions. That is why a resting place called La Isla became important. It is believed that the place received that name because it was surrounded by two streams, Aguanda and Yaucha.
In that place, the Spanish authorities decided to build a fortress named San Carlos, in honour to the Spanish King Carlos III.
History tells that General José de San Martín, in that fortress, conducted a parliament with indigenous chiefs from the area, to ensure the free passage of some columns of the Army of the Andes towards Chile, through the south, in the Campaña Libertadora (campaign for Independence).
In 1772, was established a village around the fortress, and the town of San Carlos was founded becoming the first village of the Uco Valley.

* Hazaña de Henri Guillaumet. The fearless and responsible at his work French pilot was in charge of the weekly air transportation between Mendoza and Santiago de Chile, from the Post office for Aeroposta Argentina, a subsidiary of the French Compagnie Générale Aéropostale, connecting by air Toulouse in France, with Santiago de Chile, making stop overs in Casablanca, Cap Juby, Dakar, Fernando de Noronha island, Natal, Recife, Rio de Janeiro, Montevideo, Buenos Aires, Mendoza and Santiago de Chile.
On June 12, 1930, the Flight No. 12 had to be cancelled which would take off from Santiago towards Mendoza, due to an intense storm.
The next day, June 13, the captain tried again by the normal route that was the same as the Transandino Railway along the Mendoza River, through Las Cuevas; but because of the violence of the winds, the pilot decided to take a route further south. This route had been explored, it was easier but longer, and there was no assistance in case of breakdowns.
Flying at about 6500 metres above the clouds, a strong downward current of air made him lose altitude and he was trapped within the same cloud in a snowstorm, so in a few moments he had to descend to 3000 metres, without visibility and the risk of crashing against the high mountains.
The pilot could see a large black mass and he knew it was the Laguna del Diamante which had sufficiently flat banks that would allow an emergency landing.
He flew over it until almost no fuel was left and made the descent, which ended up with the plane flipping over because of the soft snow that hampered the landing.
For a commoner, this would have been the end, because nobody would possibly come out of the trap of such white immensity in the winter, but Guillaumet had a special wit and protected the bags of the mail and made a hole in the snow to enter the plane that was upside down, he protected himself with the parachute and waited for two days until the storm was over.
On Sunday June 15 in the morning, having stopped the storm, he heard a plane overhead, but it was useless to set the flare on, because from the air it was impossible to distinguish a small object that is indistinguishable from the snow.

The only alternative he had was to try to reach the Argentina plateau, so calculating that he had moonlight and four days of good weather, despite the intense cold of winter, wind blowing from west to east, he began to walk with a small mountain compass until he found the Yaucha stream. Following the river bed, he suddenly saw a woman and a boy on a horse to whom he shouted for help. Henri’s strange appearance scared them and they thought he was a madman, according to what they said, he was a man dressed like they had never seen before. He shouted “aviaturi, Laguna Diamante” and they realized that this was the injured airman. The boy – Juan Gualberto Garcia – helped him cross the creek, and they took him to a ranch. The mother – Manuela Romero de Garcia – served him a glass of caña and goat milk.
The next morning, Friday 20, Henri was taken back by mule to the workstation Salvador Lufia, today called de Fuentes. There was a car waiting to take him to Eugenio Bustos, where a telegraph post warned his wife in Buenos Aires that had been rescued. Following the path, a plane appeared. It was his friend Antoine de Saint-Exupéry that was going to find him. The emotion was great and a crowd was waiting for him at the airport in Mendoza.