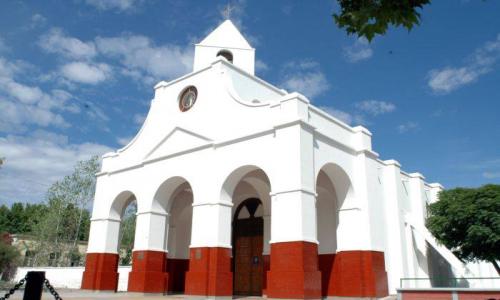 Santa Rosa has a wide range of testimony of the history and culture that forged its own identity. In 1562, the captain Antonio Chacón confiscated the Machastán and Tumbra indigenous lands. These large lands on the banks of the Tunuyán River used to belong to the chieftain Aserrín and his son Aycanta. Henceforth the lands became known as the Rodeos de Chacón. The territory of Santa Rosa witnessed two historical battles to be fought in 1874 between the rebel Mitrismo under the orders of Arredondo and the forces of Julio A. Roca, whose final victory allowed his presidency.
In 1884, after the donation of lands from Don Angelino Arenas, the Governor Rufino Ortega created the Department of Santa Rosa.
– Villa Cabecera : There was already such population in 1884 , when there was the creation of the Department. Officially was planned and designed urbanistically in 1885 , then going on to become a seat at the authorities. It is located on the current State Route No. 50 to 80 km east of the provincial capital and 40 km from the city of San Martin. It has direct access from street Suarez , the National Highway No. 7 which connects Buenos Aires and several Argentine provinces .
– Las Catitas : His birth was linked to the installation to the post of the same name by the Royal Mail Rental of Buenos Aires
Later, with the arrival of the railroad and the establishment of the station ‘s Catitas , population growth was concentrated around this , becoming known as Old Catitas had worked the area where the post . The present town of Las Catitas is placed on the Provincial 10 km east of the town of Santa Rosa Route No. 50 , having fast and direct to the National Highway No. 7 hits .
– La Dormida : Dawn also dates back to the early nineteenth century , when he was known as the post of the sleeping black . The rear rail service from the general line Buenos Aires to Mendoza was essential for their development through the nearest station Civit . The City is located on Route No. 50 Province 25 km east of the town of Santa Rosa, with access to the National Road No. 7 .
– Ñacuñan : Its main population is very small , reaching about one hundred people and is seated next to the provincial road No. 153 also known as Route Livestock .
This is the most direct route between Las Catitas and eat Monte , in the Department of San Rafael , so it’s busy charging for vehicles that carry traffic south of the province. Since recently Ñacuñan monofilas has electricity , there exist a health center a hostel school , police station and the Chapel of the Virgin of Itatí .
– 12 de Octubre : The main town is 12 km west of the provincial capital and 67 km east of the provincial capital. The district was declared as such on March 10, 1998 , bordered on the west by San Martín and Junín south through Tunuyán river.