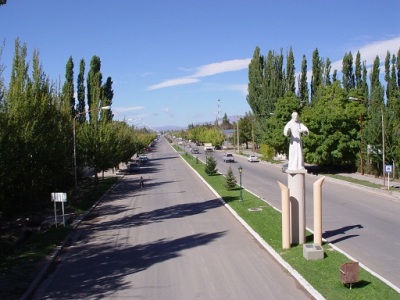 In December of 1552 the zone was explored by the Spanish conqueror Francisco de Villagra. In 1846, the Malargüe Fort was built and a year later the Villa El Milagro was founded. On April 30 1877, in a desert and not controlled area by the State and which the National Government claimed as theirs, the Legislature of Mendoza created the Malargüe Department. The 21 of April 1879, within the framework of the Campaign of the Desert the IV Division under the control of the Lieutenant Colonel Napoleón Uriburu, left from General San Martin fort, at the time known as El Alamito fort, with the 7 and 12 Cavalry Regiments, the New Creation Battalion, a Mountain artillery battalion, the First and Second Cavalry National Guards Companies and a Group of Doctors and Engineers, adding up a staff of 941 people. In 1886, Villa de Malargüe is founded by a decree on the base of the El Alamito fort. Its name was changed in 1887 to Colonel Beltrán and later in 1892 the department was annulled, integrating the territory as a district of Department on 25 of May. In 1955, it was re-established as the original Department of Malargüe.