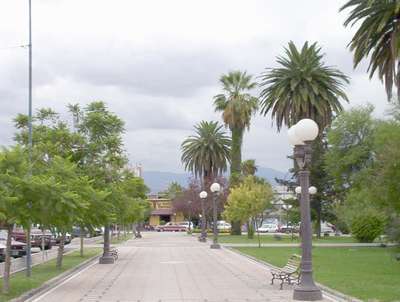 When the first Spanish settlers arrived in this valley, they found various indigenous groups living in close relationship with the alluvial channels, to facilitate their work in agriculture. A large percentage of irrigation canals, within the current irrigation system, have a pre-Hispanic history and Godoy Cruz is no exception to that context.

Judging from the archaeological remains found in the Department, we can think of traces of the tribe Tunuyán and not the presence of the Huarpes – as originally stated – considering that the latter occurred just at the end of the fifteenth century, with the domination of our territory by the Incas.

The Mendocinean historian Isidro Maza claims that shortly after Mendozawas founded, the Captain Lope de la Peña headed south along the shores of the Cacique Guaymallén canal and established a farm there.
When the Captain Lope de la Peña died in the year 1600, his wife donated the farm to the convent of Santo Domingo Soriano and the property was renamed “Chacras de Santo Domingo” currently the area of Puente Olive.
There Dominican priests colonised the Indians and their descendents, teaching them the principles of the Christian religion.

* The Oratorio de San Vicente
In 1753 in these lands settled Don Tomás de Coria and Bohorquez, who in his villa built an oratory in honor of the religious Spanish Dominican San Vincente Ferrer. This oratory became a parish around which established a village called Villa de San Vicente.
In 1819, the citizens of the District of San Vincente asked for the construction of a public square in an area next to the chapel of San Vincente. Around the square, many shops and neighbours residences were established, including the residence of the family Tomba (now Banco Nación).
In 1855 to the Governor of Mendoza, Don Pedro Pascual Segura, separated the current department Lujan from the territory of San Vicente, saying that “in the latter there is a square and a chapel, conditions enough that give it the character of a town.”

* The creation of the Department of Belgrano
In 1889, the town of San Vicente was renamed Belgrano, as a tribute to the creator of the flag, but the settlers continued to use the old name.
From January 1, 1872 it was organised by the Municipality of the department, becoming the first municipal government headed by Don Vincent Maure. In 1895 the first Deliberative Council is formed, whose president was Don Rufino Cubillas, accompaned by the Governor Don Abel Villanueva in the management.

* The foundation of the City of Godoy Cruz
On February 9 1909 the Mendoza Legislature passed the Act No. 472 by which stated as a city the one that used to be Villa Belgrano. It is definitely established the name of Godoy Cruz in honor Dr. Tomás Godoy Cruz, a Mendoza representative in the Congress of Tucuman and also the governor of the province and an outstanding legislator.
The anniversary of the department of Godoy Cruz is celebrated on May 11.