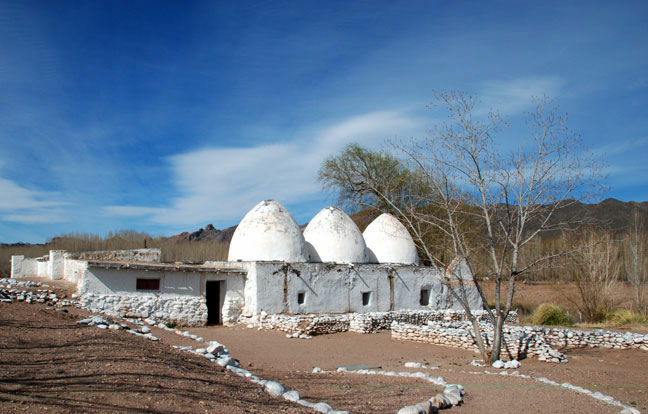 The first inhabitants in this region were the Huarpes and the Incas, who especially in Uspallata left the vestiges of the last left point of expansion. However, most of the present population has their origins primarily in the Spanish and Italian families, who occupied the territory in two different stages of the European immigration. Before the founding of Mendoza, the current territory of Las Heras was explored and recognized by Francisco de Villagra. The conquest and colonization began in 1562, when the Captain Pedro de Ribas and his wife, Mrs. Lorenza Bustos, settled in the area. There was born their first child, who was years later, the priest Pedro de Ribas and Bustos and serve as a missionary among the Indians. The ranch founded by the Villagra couple was then known under the name of San Miguel de Panquehue, being its building the same as today is the city of Las Heras and its environs. Since 1608, date of installation of the Jesuits in Mendoza, they began to spread an intense spiritual and evangelizing activity. This congregation built a small chapel devoted to the veneration of Our Lady of the Good Journey; they also established a home of exercise and a cemetery. After the earthquake of 1861, nothing was rebuilt. Nevertheless, with the time passing by, it transformed itself into a fiefdom of the wealthy gentlemen, mostly from Chile.

In 1846, being the governor of Mendoza, the General Pedro Pascual Segura, there were created the campaign departments 1st, 2nd, 3rd, 4th, 5th, 6th and 7th, designating their respective authorities. The First Department of Campaign included in its jurisdiction, San Miguel de Quehua, which had as the official chapel of the one of San Miguel. The Second Campaign included the town whose head town was called the Chimba neighbourhood, and its inhabitants used to use the Chapel of Our Lady of the Good Journey because it was the closest to the neighbourhood.
On December 18, 1869, the Legislature of the Province decreed that the territory comprising the former San Miguel de Panquehue and La Chimba, which had been established under the name of First and Second Departments of Campaign, would form two sub delegations, named respectively: Subdelegation de Las Heras and Subdelegation de Villeta.
Later on, on January 31, 1871, the then governor of Mendoza, Don Nicolas A. Villanueva, decreed the unification of the two sub delegations, establishing it in the Article 1 of the respective resolution, as follows: “The First and Second Departments of Campaign will be part of one sub delegation, with the allocation assigned by the law”. In this way, with the unification targeted, the department of Las Heras was created, and whose name is a tribute to General Don Juan Gregorio de Las Heras, a soldier and warrior of Independence.