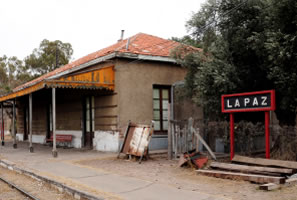 The original inhabitants of La Paz were the Huarpes, this region used to be Yopacto, and an important leader was the Corocorto Cacique. The royal settlers arrived in these lands under the orders of the Sancho de Medrano, and the first small chapel of San José was constructed with sticks and mud, in order to catechise the natives into the Catholic Church.
In the eighteenth century, there used to be an important traffic of wagons going through the actual department of La Paz from Mendoza towards the coast with the regional products.
On the 24 of December 1791 the commander Amigorena, under the orders of the Vice Royalty of Rafael de Sobremonte, founded the town of San José de Corocorto, which today is known as Villa Antigua.
The route to Buenos Aires was of 800 kilometres, a reason why a “stop over” was an important break during the journey. That was done at the Desaguadero and San José de Corocorto Inns
On 4 of August 1850, the Villa de La Paz was created, under the orders of the government of Alejo Mallea.
In 1960, a temple was constructed to keep the image of Nuestra Señora de La Paz. Every 24 of January there is a religious commemoration, celebrated with a novena and a procession around the square of Villa Antigua.