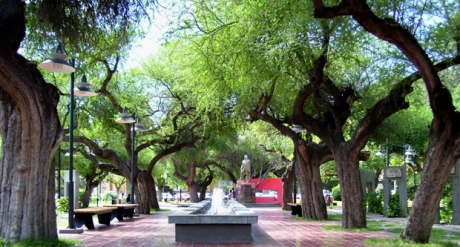 The department of Lujan de Cuyo was established on May 11, 1855 under the name of “Villa de Lujan” during the government of General Pedro Pascual Segura. Its town was established in 1872. The people of Lujan made a major contribution to the history of Independence Argentina; they played a leading role in the formation of the Andes Army. The village of Lujan was declared a “City” in October 1949. In 1964, the city as well as the department started to be called “Lujan de Cuyo.
At the beginning, when the Spaniards by a determination of Governor Garcia Hurtado de Mendoza, under the command of Captain Don Pedro del Castillo arrived at the Huentota Valley during an expedition consisting of sixty Spaniards, a thousand five hundred Indians and an auxiliary chaplain, Frey Humberto de la Cueva. They found a precarious but effective artificial irrigation system which the local population would use to grow potatoes and corn original American cultures, at the time unknown in Europe. Captain del Castillo called the place Mendoza – the New Rioja Valley. It was March 2, 1561. The name was a tribute to the Governor of Chile Hurtado de Mendoza and homeland of Castillo.

The irrigation system was derived from a channel called Goazap Mayu or Potu del Inca and soon the Spaniards started calling it main acequia or river of the city. The city was located on the right bank of the canal.
Replaced in Chile Hurtado de Mendoza by Captain Villagra, the new governor posts a new expedition commanded by Captain Juan Jufré. He, in an attempt to eliminate what Del Castillo had done moves the city to the left bank “two shots of harquebus” to the SW claiming that the new location suits better and renamed the city with the name of “Resurrection – the Huarpes Province.”

Yet time and the facts were overtaken respecting the name of Mendoza. Importantly, the Spanish expedition and the foundation of Mendoza have the particularity that it was made by a request of the Indians from Cuyo, who wanted to be given “knowledge of God, a sense of fulfilment and be kept in the justice and reason.” The leader of the Indians was the Cacique Conecho governing the region of Uspallata by the delegation of the other caciques, and who sent his son Chacha in an ambassadorship to Chile.

It was hard to the Spaniards to settle in this place, who usually resided in Chile. There once was an extreme point of being 12 Spaniards left 4 years after Mendoza founded. The governor of Chile took drastic measures, such as removing the funds to “settlers” who did not to stay, and thus the settlement grew and the population in the year 1600 amounted to about 80 Spanish settlers.
The willingness and meekness of the Indians made it possible for the settlers to stay, but some Spaniards would send the Indians to Chile, which started affecting the workforce of Indians, therefore leading to their replacement with slaves whose introduction was authorized. This time settlement was a long and difficult period and since then the most drastic problem for the expansion was the provision of water, both for the population and for the cultivation. The struggle against the forces of nature was constant, reconstructing what the floodwaters had destroyed, the rising from the river or “dry river” that descended from the nearby mountains, was a veritable scourge.

However, the lack of resources and the detachment of the settlers, made it take long before making any decisions to end this situation. It is noteworthy that in general the Spaniards were looking for gold or silver and not for becoming farmers. It was the necessity and the lack of resources that made them settle at the new land. The people could not absorb the costs of the constructions, as their income was modest, so that only in the year 1788 there could be contracted a work on the river for the irrigation. After a competition touted throughout the city two bidders presented themselves: Don Nicolas Corvalan and Don Juan de Godoy, the work being delegated to the first. After some observations made by Corvalán the contract was terminated and the work awarded to the architect Joseph Conte.

With a budget of 6000 Pesos, the signature is endorsed by a co-signer, Mr. Pedro Espíndola. The work comprises a wall that makes up a box with two arcades and a bridge. The material is lime and pebble and their extension is about 20 metres, although their measuring, of course are given in rods. Mr. Conte, because he saw that certainly the budget would not be enough to complete the work, quite leaving his guarantor, Don Pedro Espíndola, with the obligation to complete it. Mr. Espíndola of apparent liability, got to the point of mortgaging his property and selling two of his slaves in Chile, but he still failed to give an end to the construction. That is why Mr. Espíndola requested the Governor to accept the work the conditions it was. This action called for a “visit of eyes” (inspection) which resulted in differences, but the sensitivity of the governors however, overcame them and so the opted for the acceptance of the work and finishing it. It was August 6, 1791. By that year, Mendoza had already 8000 inhabitants, the expectations of the population were many, but after a year or so, there was a change in the course of the river, and the work became isolated and was abandoned. Over time, an upper terrace of about 3 metres was formed from the actual riverbed and the destiny of that construction was to become a Water Monument, because it was the first hydraulic construction in the Vice reign of the Plata River, to these ends and in a mountain river.

It was not until 1754 that the city Solicitor raised the need to take concrete steps, but it did not go any further than being an isolated episode. In 1776, with the creation of the Vice reign of the Plata River, the political structure is amended and in the year 1783 Cuyo becomes part of the Governorate of Cordoba del Tupungato, designating himself as the governor the Marquis of Sobremonte.

The Marquis of Sobremonte moves to Mendoza in 1785 to inspect and advice to the Mayor of Mendoza about solving the rain water problems, considering them as the most important ones. This was a stage of a total lack of planning in a city that had already 6000 inhabitants. However, Sobremonte was a progressive man and decided to have a reservoir constructed in the river (nowadays the Mendoza) as well as a bridge over it allowing the river to pass by. In addition, he made a canal to derive the excess water to the Canal Zanjón. In the same occasion, the construction of a canal that collected water that descended from the foothills was determined. Due to the fact that canal would limit the cultivation area it started to be called Canal Jarillal.

The original designation was the Royal Canal like its parallel street, today known as Boulogne Sur-Mer. At the beginning of the eighteenth century, Mendoza was progressing in its trade with other provinces. Wine, liquor and olives were taken to Buenos Aires. In those years, the commercial transport was done by wooden carts, covered with leather and awnings of reeds and straw. It was in those times when Don Pedro Molina and Vasconcelos, during a trip to Buenos Aires near the town of Lujan, became seriously ill. The trooper promised to the Virgin of Lujan, to bring a statue of her and build a chapel in her honour if he got better. The trooper improved and fulfilled the promise. He built the chapel on one side of the square where City Hall used to be. The earthquake of 1861 the chapel was destroyed. The current church was built between 1909 and 1917.