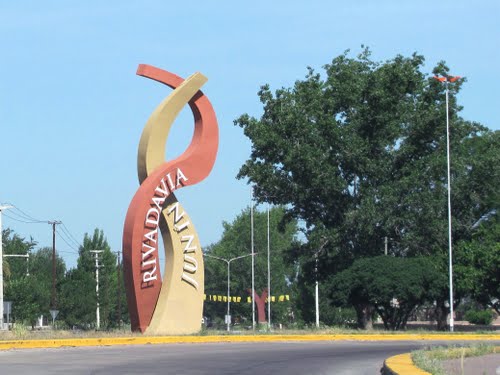 In the eighteenth century, the current territory of Rivadavia belonged to Curato de Corocorto, where most of its inhabitants were Huarpes.
This jurisdiction involved the left bank of the Tunuyán River, the lands eastward up to the Desaguadero and in the west up to the town of Las Ramadas, that was the place of origin of the department.
The city started alongside the banks of Tunuyán River as a result of the economic activities of the time, as there were different stops to cross the river which were very useful for the carts carrying salt, to Corocorto and San Luis.
That was how the Las Ramadas (huts) arouse, typical buildings of wooden poles and roof of reeds or straw with mud.
Bit by bit they started to multiply, as the salt makers had to spend several days to rest, refresh their animals or fix their transport or to wait until the river flow went down. Therefore those villages started to have the features of incipient population centres.
As early as 1859, the department of Junín was created, with the name of “Retamo”, the huts then were incorporated to its area, with a population of about two thousand people. Later on the name was changed from “Las Ramadas” to “San Isidro Labrador.”
In mid-nineteenth century this was the most important village of the Mendoza eastern area.
In 1884 the Legislature of the Province approved and promulgated the law establishing the new jurisdiction, introducing a change in its name to “Rivadavia.”
Around 1900, the head village of Rivadavia, was slowly receiving input from immigration, which contributed to its progress.
In 1953, by a decree of the Government of the Province, the town of Rivadavia was upgraded to a city status.