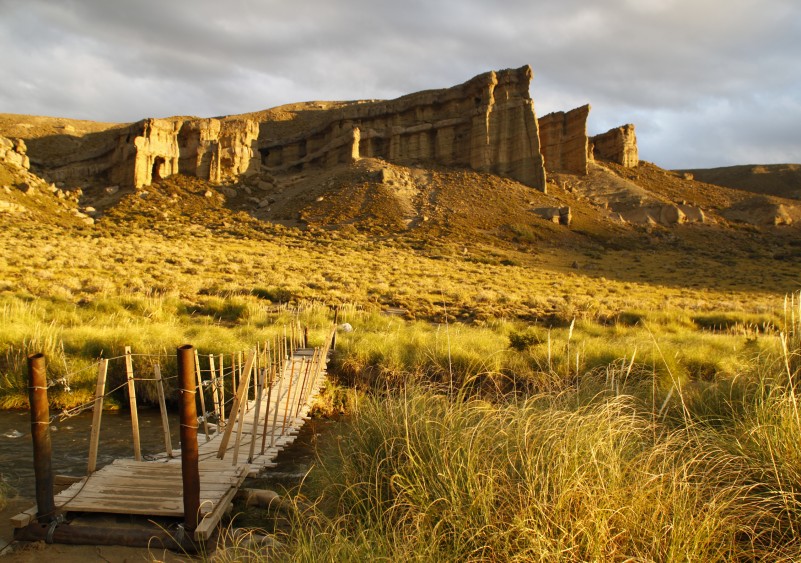 Castillos de Pincheira is located in the Eastern slopes of the Cordillera Principal or of the limit, in the department of Malargüe, 28 kilometres from the head city of the Department, comprising a total of 650 hectares.

Being part of an atmosphere of dry weather, the rock formation called “Castillos” is composed of a group of sedimentary-volcanic slopes in the Algodón Hill, 2163 metres high, on the right and South banks of the Malargüe River.

The objectives for the creation of this reservation consist of, on the one hand the landscape importance, and on the other on the conservation of the middle basin of the Malargüe River that provides drinking water to the homonymous city.

It consists of a sedimentary volcanic group. Its origin is due to explosive eruptions of neighbouring volcanoes, possibly by the end of the Tertiary Era. Today its clear stratification and exhausting and formative action of water and wind have generated a major tourist attraction for its landscape beauty. These agents act on sedimentary rocks, especially sandstones. At the bottom of the formation, there is a wide variety of eroded cones, the result of the sliding of material.
This natural monument is inserted in an arid climate with little rainfall occurring in the form of downpours in the summer. One characteristic climate element is the Zonda Wind. The water and wind create strange shapes, similar to a great castle with its towers. Its height is approximately 60 metres; the area is characterized by the presence of walls, worn out low height rock formations.
In this area, there are archaeological evidences. The difficult access to these natural formations was used by the Pehuenches, who would prepare them for defensive purposes.

Biogeographically, the reservation is located in the Patagonia Biome. The vegetation is sparse and consists of shrubs as “molles” and “chirriaderas”, and xerophytes grasses as “tupe” and “coirones”. On the riverbank there are meadows or “mallines”, whose permanent provision of water in the soil promotes an incredible richness and plant diversity. In the past, there used to inhabit the area guanacos and rheas. Because of the human pressure, those species disappeared from the area. With its recent creation, a natural re-colonization by these species is expected. In addition, there are mountain “vizcachas”, mountain lions, red foxes and towards the higher areas, condors and eagles. The river is inhabited by indigenous catfish. In the basin, the “otuno”, or velvety catfish, stands out and is recognized as a species threatened with extinction worldwide.

The torrent duck, also identified as vulnerable to extinction, is abundant, indicating an excellent state of the environment for the quality water and present care for the wildlife.