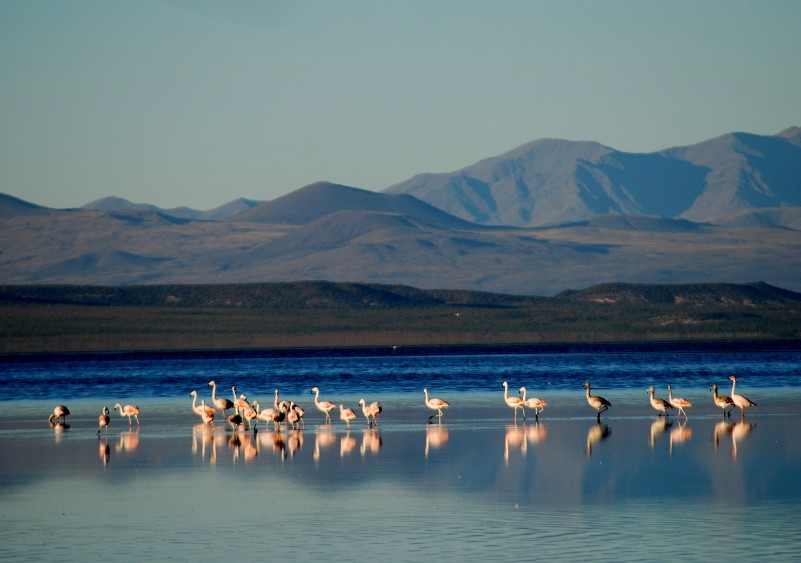 The reservation is located in the south of the province of Mendoza, 470 kilometres from the capital city and 65 kilometres east from the town of Malargüe, in the department of the same name. The area was declared a preservation site in 1980. It protects approximately 40000 hectares covering the entire extension of the lake that gives the name to the reservation.

The Llancanelo term derives from the indigenous voice Yanca = quartz stone with which the arrowheads were made, and Nelo = greenish blue colour, which is believed to be a reference to the appearance of the triangular lake. The latter when observed from high places shows the shape of an arrowhead constructed by the natives to hunt.
The basic idea behind the creation of this reservation is the richness of water birds as it is one of the sites for nesting, feeding and migrating birds, it is considered one of the most important wetlands in South America. The park rangers’ base is called Carilauquen.

In contrast to the elevation of the Andes, in different sectors, adjacent to the mountains, depressions were formed such as the extensive Huarpes Depression. In the Southern part of this depression and in the so-called bajo Llancanelo is where the lake lies.

Landscape
The lake is bordered on the South and East by the region of the Payunia, highlighting the ancient volcano known as Cerro Carapacho. This volcano has the particularity that the lava that gave it shape was very fluid (called hydroclastic since it was mixed with water), and its shape shows a broad base and low altitude. There are also the volcanoes El Trapal and El Coral. The lake has a length of about 50 kilometres from the North to South and 10 to 12 kilometres from East to West, and the depth is almost entirely less than a metre. Even though rainfall is rare, permanent streams and semi-permanent ones feed this body of water. The surface of the lake varies markedly from year to year depending on the contributions of its main tributaries and the total area of the watershed contribution is 4600 square kilometres (a watershed represents the entire area whose waters flow into the same sector). To the North flows the Malargüe River,, one of its main tributaries on the surface, forming marshes and swamps. Towards the northwest, some slopes form grazing meadows and even originate little creeks that run through a short distance, such as the Carilauquen, Menucos and Carapacho creeks. This ecosystem forms a group of swamps, marshlands, salt marshes and ponds. Generally, there is an increase in the salinity in the soil as we move closer to the lake, and this affects the plant communities according to the concentrations of salt from the soil. One of the most striking features when the fauna is analysed is the great diversity and abundance of waterfowl and water birds. This site preserves one of the largest nesting populations of flamingos in the world (three species). The flamingos are specialist feeders, filtering plankton and small organisms with tiny channels that they have within their beaks that are plunged upside down in the water.

In addition, more than 10 species of ducks nest there; among the most visible are the black neck swan and the coscoroba swan. The ducks feed on the surface of the water with their flat beaks that take seeds and small animals that float on the water. There are gallaretas and several species of herons, the first eat submerged vegetation, and the herons catch fish, small vertebrates and arthropods. As a flyway, this region is important for shorebirds and chorlitos that get their food plunging their beaks in the mud of the shallow waters to obtain small crustaceans and other invertebrates. As you can see, the water birds have a wide variety of ways to exploit food resources and thus can live with more than 220 bird species without overcoming their niches. Moreover, nesting patterns are varied as the small “cono trunco de barro” of flamingos, the gallaretas platforms of waterweeds, the herons building nests on bushes or simply by nesting on the ground as the ducks and chorlos.

In addition to the birds, there are other aquatic species like coipo, a medium sized rodent, adapted to life in the water with their flat paws to swim skilfully and their burrows dug in the river where they also get aquatic or the shore vegetation to feed. Among the fish fauna, the presence of Patagonian silverside, which feed on plankton, should be highlighted. In terrestrial environments around the lake, there are vizcachas, cuises, piche, gray and red foxes, snakes and rheas. In the salt marshes around the lake inhabits an endemic rodent considered threatened of extinction that builds its nest in the dunes: the vizcacha rat of salt marshes. It feeds on halophile vegetation, being one of the most adapted mammal species to life in the desert world. The plant communities here are open and high shrub thickets and grassy steppes. There are three typical species of jumes (saltbush) and salt grasses in low-areas with the largest concentration of salt. Towards the highest parts with small dunes, there are zampa, chuquiraga and llaullines. In the lake underwater vegetation, marshland vegetation as reeds, cortaderas and totoras stand out.