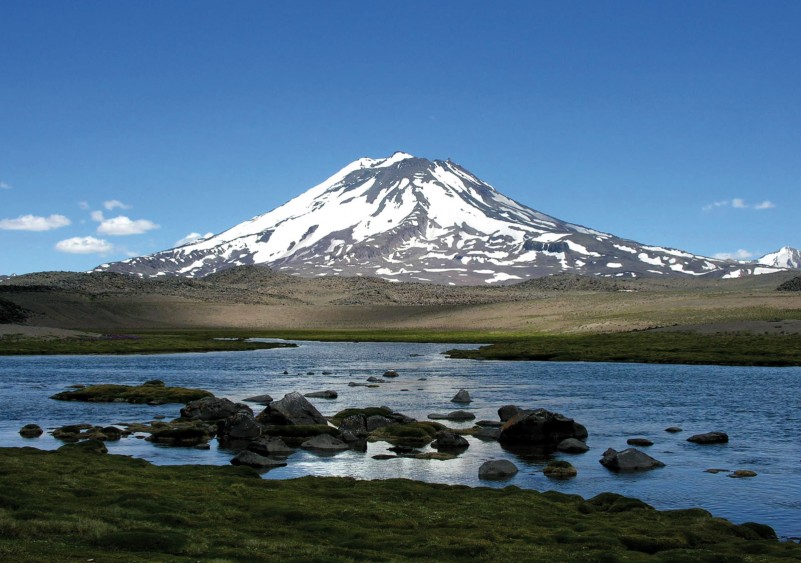 The reservation is located 200 kilometres southwest of the city of Mendoza, within the department of San Carlos. It was declared a preservation area in 1994. It has about 110000 hectares and protects an important sector of the crest of the Cordillera Principal, in the central Andes, which covers the Volcano Maipú of 5323 metres and the lake itself, which is at the altitude of 3300 metres. This lake is one of the main reservoirs of fresh water in the province.
There are guanacos, red foxes and ducks, among other wildlife.

Volcanism in the high Cordillera
At the beginning of the Quaternary period there was the collapse of a huge volcanic caldera of 14 to 17 kilometres in diameter, where nowadays the lake is located. The calderas can resemble huge pots caused by subsidence or collapse of a volcano. There were also large eruptions of volcanic ash-rich in silicon.
The lake is fed by water from the ice and snow melting and is the Diamante riverhead.
The most important rocks after the formation of the caldera are lava from the Maipo volcano. Its eruptions constructed a building of approximately 5200 metres.
This volcano presents a typical triangular shape that reflected in the lake creates the image of a Diamond, which refers to the name of the lake.
One aspect to be highlighted is the effects of seasonal freezing. The action of the cold and the snow covering cause various processes, cryoclasm is one of them, it is the fracturing of rocks because of the expansion of ice in the cracks and also by extreme temperature variations. The flows of sediments along the slopes are very common in large areas covered with volcanic materials, pyroclasts, one of the main characteristics of the area of the reservation.
It is interesting to point out, the effects on vegetation, where clumps of grasses generally acquire the form of circles or polkrogoma. The geocryology is the science that studies the effects of low temperatures on the earth’s surface. The freezing and thawing of soil exerts a major effect on the materials from the crust and therefore determines the distribution of plants and animals. A very important condition is the time during which these layers at the top of the crust remain frozen and the time during which they are subjected to continuous cycles of freezing and thawing. All the Andes are regarded as cold land or cryogenic.

Biological aspects
The animal and plant species that live there are of particular interest, demonstrating remarkable adaptations to life in height and concentrating toward the lower parts of the park. The dominant vegetation is a very open sub arboreal scrub of yellow firewood and yareta, grasslands of huecú (a sort of grass of the mountain) that become denser and lower with different composition of species in the plains, which correspond to sites with accumulation of water. The soil is poor in nutrients, remaining frozen most of the year.

This reservation protects large summer areas for big herds of guanacos migrating to low regions in the department of San Carlos during the winter. In the open sites inhabit cauquén, a species of duck that feeds on plants and seeds, and the caminera that consumes insects at ground level. There are several species of mountain mice that hide in burrows to avoid predators such as the eagle and red fox.
The lake has no native fish; trouts were introduced to be used for sport fishing.