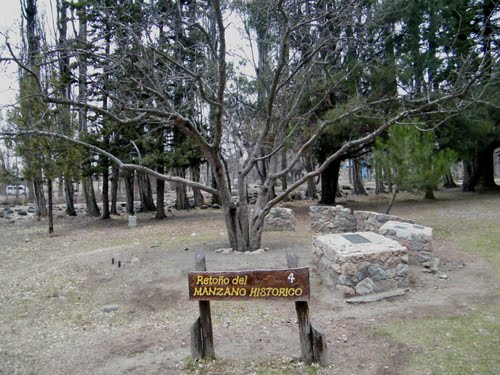 The Provincial Manzano Histórico Reservation is located in the Department of Tunuyán, at an altitude of 1200 metres above the sea level, 120 kilometres from the city of Mendoza and 40 kilometres from the city of Tunuyán. It covers an area of about 1000 hectares. It protects the Sanmartiniano historical monument. It is notable for its landscape and the quality of water from their streams, which make it an excellent tourist attraction. The area is an important fish station from the Renewable Natural Resources Bureau, which serves to supply the main streams in the province with salmon like fish.

The reservation is located in the Eastern sector of the Cordon del Portillo in the Frontal Range, including a foothill sector. The Frontal Range is connected to the Main Range and disappears to the South of the Diamante River, with heights reaching up to 5000 or 6000 metres above sea level. It is a very old Precambrian and Paleozoic aged mass, penetrated by granitic bodies and other magmatic rocks.
In the Cordon del Portillo, the relief is made on an association of volcanic rocks as riolitas and dacitas. The elevations of the relief of the Cordon del Portillo barely reach the altitude of 5500 metres; this area is therefore lower than the Cordon del Plata. This reduces significantly rainfalls, making the climate extremely arid.
The arid climate has favoured the formation of soft erosion surfaces in the foothills (pedimentos), which have been covered by deposits of ancient alluvial fans.
In that area, there are two streams: the Arroyo Pircas and Arroyo Grande. They have a permanent regime and their waters originate mostly from the snow and ice melting on the High Mountain range. Their flows have a noticeable increase in the months of December and January. Their physical chemical characteristics allow them to be classified as excellent for both human consumption and for irrigation.

The biological richness of Tupungato, “the land that flourishes”
Considering that as an extreme elevation ecosystem and low precipitation rates, it is a harsh climate, therefore the biodiversity is low. However, the plant and animal species that live there are of particular interest, demonstrating remarkable adaptations to life in altitude, and are concentrated towards the lower parts of the park.

The vegetation that dominates is the altitude open grasslands of huecú (a sort of grass of the mountain) with limited areas of low scrubs and shrubs such as “yellow firewood” and “goat horn”. In general, the vegetation is adapted to withstand low temperatures, poor and full of minerals soils, snowstorms and wind.

All this is what gives this region its appearance of low and bushy vegetation that grows forming a “cushion”. There are the plains where water accumulates and there grows another kind of vegetation that supports long periods of freezing soil. In the lower foothill areas, the shrub communities are higher and more closed.
The most typical animal species are the condor, the eagle, guanacos, foxes, mountain mice, agachona, standing out a kind of frog and a lizard, both typical of the mountains. The European hares are abundant, being an exotic animal introduced in the region.