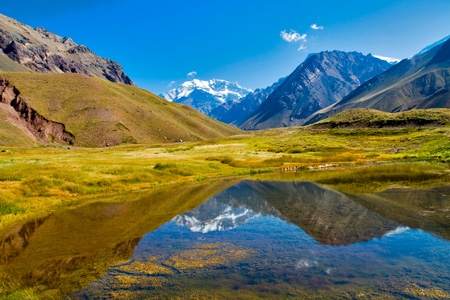 The park is located in the department of Las Heras. Its main attraction is the Aconcagua Mountain , which, with its 6960 metres is crowned as the highest mountain in the Americas. The area is notable for its glaciers as reservoirs of freshwater as well as for its archaeological remains.

The name Aconcagua derives from the Quichua ACKON-CAUAK, meaning stone sentinel. The region is characterized as arid and rocky, with high peaks covered with eternal snow. The vegetation is poor and covers the slopes up to an altitude of 4000 metres, there can be seen as herbs as the Coiron and low shrubs as the Yellow Wood.

The wildlife is also scarce and shows special adaptations to withstand such aridity. One of the most common birds is the majestic Condor also called the king of the Andes.
Some of the main attractions of the park include the Aconcagua, Laguna Horcones, Plaza de Mulas and Plaza Francia. They allowed this monument to become a financially self-sustainable unit. This reputation has demanded international investments and improvements tourist’s services.

In addition to the natural sightseeing, there are activities such as hiking, camping, climbing, mountaineering, trekking.