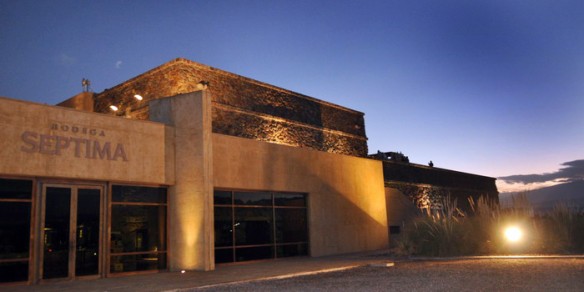 Septima is the winery of the Codorniu Group, located in Agrelo, Lujan de Cuyo, Mendoza, at the foothills of the Andes Mountain.
The winery with 4,500 square metres and with a capacity of 1,500,000 bottles, was made with the technique of pirca – used by the natives Huarpes to construct walls and houses – which consists of stack one rock over another, using natural stones.
All the vineyards – 5 years old – use computer-controlled drip irrigation system, which allows a precise control of soil moisture by the sensors and the modification of it in each sector. This enables the implementation of the latest techniques in improving the wine quality such as RDI (Regulated Deficit Irrigation) and RDP (Partial Root Drying), to enhance the flavours.
At present, Septima is making two types of wines: a range of wines made up of generics, Septima Malbec – Cabernet Sauvignon and Septima Chardonnay Semillon, and another one is the varietal line, Septima Malbec, Septima Cabernet Sauvignon, Septima Tempranillo and Septima Syrah. Besides, the winery produces a sparkling wine prepared using the traditional method, María Codorníu, whose composition is 80% Chardonnay and 20%Pinot Noir.
Septima has also had, since mid-2004, a reserve wine made with the Cabernet Sauvignon and Malbec varieties.
The wines are destined by 60% for export, and by 40% to the Argentine market. The main markets are the United States, Switzerland, Canada, Brazil, Uruguay, Poland, Ukraine, France, and Spain among others.
Visitors to the winery have the opportunity to have lunch there with previous reservation.