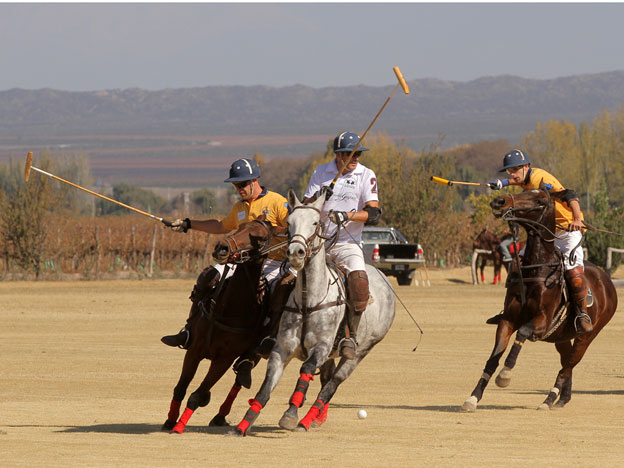 Arts, Polo and Wine Tournament is an event that, as its name suggests, combines three passions in one place. The polo fields are filled and weds with music, art, tastings and games. Despite its short existence (done from just three years ago), it has already been declared of Provincial Tourist Interest. As for the venue, the courts have varied during different editions, to promote all the alternatives offered by the province of Mendoza.

The venues so far have been: Club de Campo Mendoza (Guaymallén), Equestrian Club and Club Tunuyán (Valle de Uco). Counting polo players and the general public, attendance reaches 1,000 people, and is increasing every year. Salto, Creoles and poles are some of the activities that offer a high-caliber horse show. Also involved students of the School of the Equestrian Club Salto Los Cerros, showing different tests high jump. Skills Criollo horses and polo matches, central to this event are also available.

The tournament is played on 5 chuckers (times). Times last 7 minutes, and all players who register for the tournament will be different teams, armed by the Organizing Committee to ensure that the game as evenly as possible to develop. The winner of each zone goes to the final of the tournament. The public can enjoy games, live music, tasting delicious catering exhibiting wineries and gourmet food, plus art exhibitions.

Among the artists who have participated is Sandra Persia, Federico Barrault, Ayelen Arrigo, Marcelo Von Der Heyde and Natalia Camenforte. Younger also have a place at the event, with paint and the possibility of playing in Pandy & Co Cup. The more than 20 sponsors in addition to the proposed offer stands with fun games and sweepstakes. The public can participate and win great prizes.