You are here: Mendoza » » Uco Adventure 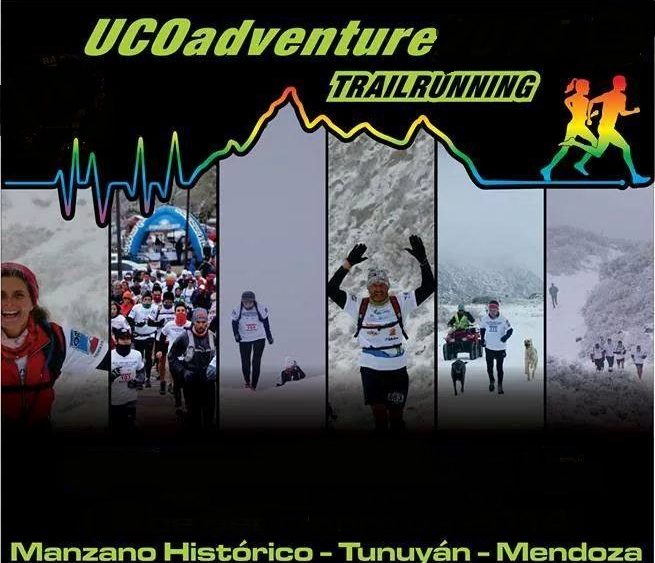 It is a race on foot, by roads, bites, ravines and rugged paths, where participants must overcome all kinds of natural obstacles such as canyons, sectors with stones and uneven terrain, cuts, ditches, cracks, etc.
The modality developed is individual and the distances are 42km, 30km, 21km and 10km competitive and 5km participatory.
It goes from Manzano Histórico on the main street, run about 2 km up to reach the Los Puntanos stream, to go to the left and up a path to a hill, staying on our right hand of the enunciated stream. Along this path you will reach the top of Cerro San Pedro or de la Cruz. 2200 m s.n.m.
Then you go down crossing the edge to the monument to go down to the street (route 94 – where the first hydration station is located). From there, you go down by asphalt about 200mts to enter through the gate located on the right. It will cover about 2.5km crossing two streams (Las Pircas) to then connect with the Pampa del Durazno to reach the base of Cerro San Pedro or La Cruz at 2,600 m.sn.m. (Here is a second hydration station). Later, you will go down to the street to go to the Quebrada Los Oscuros (where the participants will be able to stock up on isotonic drinks, fruits, nuts, soup, if it is necessary to request a medical check-up). Continue along this street until the control post of Gendarmería Portinari at 2450 m s.n.m. reaching the entrance of the sandbox where they will meet the extreme PC. Here the registration and control of the identification number will be made to undertake the return by retracing the route to the Quebrada de Los Oscuros. Place where you pass again by the supply station to ascend the Quebrada de los Oscuros to the Mesón del Colorado. You will cross a plateau without cross-country trails until you connect with the path that leads to Los Potreritos Stream, which has a path that leads to the street (last hydration station). Down the street you will go down about 5k to the monument where the race ends.
Changes in the course of time: We know that heavy snowfalls may fall during the season, or the climate may be very hostile due to storms and possible zero visibility in the high mountain area. For this reason it is expected that the routes will be altered.