You are here: Mendoza » Harvest Festival » Vía Blanca and Carrusel 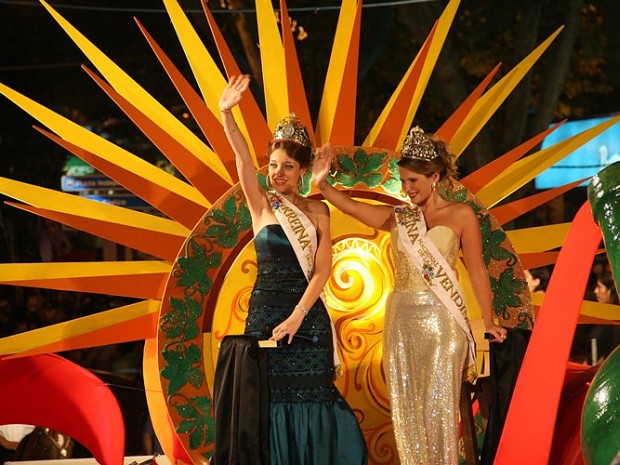 The Via Blanca de Las Reinas

This so popular festival at the moment, actually came after the Carousel by a coincidence. In 1940, a strong storm prevented the realization of the central open-air show as was customary and the election of the Queen was at the Plaza Hotel. This climate accident determined that a parade of cars was organized under the name of the Corsican floats, on Monday after the election.

Since then, the Gala show of the queens was joined permanently to the series of central events. Thus, every Friday preceding the central act people located on the sides of the streets downtown, can appreciate the beauty of the candidates to the harvest throne. During that night, the departmental queens and their court parade in floats showing the economic potential and landscape of each department.

The parade is led by the queen and vice queen of the previous year, continues with the invited national queens and culminates with the departmental cars, taking the aspirants to the harvest sceptre.

The Via Blanca, along with the Carousel, is among the festivities that concentrate most people on the streets. The amount of the public in recent decades has been about 150,000 to 200,000 people, approximately.

It is a staged in the main streets of downtown Mendoza commemorating the wine and its context. It takes place aturday morning that takes place in the Central Act. It is a tour of floats to the festival and the representative of each department with their queens through the streets of downtown. Parade also other Provincial and National Queens, as well as gaucho federations and other institutions of the province.

The idea, which was worked on and – now is preserved – is the summarising of the past of Mendoza. And that is why gauchos parade with their donkeys, mules, horses, carriages and freight wagons, as a symbol of rural work and the crossing of the Cordillera, by the Liberation Army.

In its origins, also the most beautiful young people of each neighbourhood would participate, representing the countryside. The Carousel has moved from the street of the General San Martin Park to the city streets, always with a participatory nature.

More than 200,000 people group up into the major arteries to see the parade of carriages that symbolize the rural work and which also incorporate the traditionalist centres and communities from other countries.

The Carousel shows the evolution of history and folklore of this land and seeks to disseminate the image of the industrial Mendoza, of fine wines. Each of the 5 wine regions, parade showing the fruits of their intensive vineyards, wineries, canals, acéquias and a large structure and producing equipment.

In the Carousel is the slogan is to participate, and although the strength of the horse has been replaced entirely by the engines, the tradition of the parade of riders with typical attire remains.