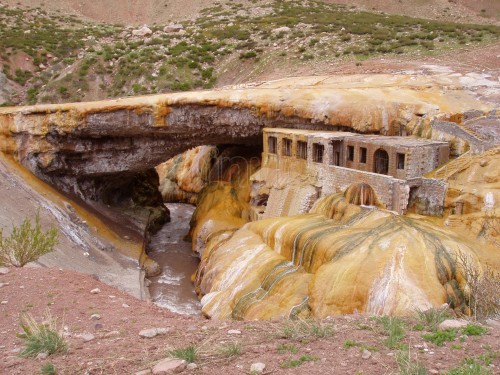 * Las Cuevas
This is an Andean Village inaugurated in 1953; it is located 195 kilometres from the capital of Mendoza and is 3151 metres above the sea level. Having endured a long period of neglect, currently, it has begun a recovery phase and the incorporation of major tourism enterprises, to turn it into the town of climbers.

* Villa Los Penitentes
This Ski Centre has excellent slopes and modern lifts. It is located 173 kilometres from the city of Mendoza.

* Aconcagua
Located in the District of Las Cuevas in the upper and lower Horcones Valleys, this “Colossus of the Andes” a majestic 6,962-metre mountain rises above all the mountains of the Americas. Elected by climbers from around the world and lovers of the adventure, it is visited by over 3000 people with the challenge of reaching its maximum height.

* Los Puquios
This is the name of a hill and a town near Los Penitentes and that means in the Quechua language “Slope of very pure and crystal water”. It is located 2,700 metres above the sea level and has a Full Mountain Centre with ski slopes and a shelter for climbers.

* Puente del Inca
This bridge full of legends is a true miracle of nature. It has taken the name “del Inca” because it was frequented by members of this pre-Columbian empire in order to exploit its waters with healing properties.

* Cristo Redentor
It is the first International monument for the Peace, it is 4000 metres above the sea level in the Andes Mountains. It represents the longing for peace and Continental unity inspired by the liberating gesture in the times of the struggle for the Independence.

* Cerro Tunduqueral
It is located about 1900 metres above the sea level and it was named after the animal living in the vicinity, the Tunduque. It has cave paintings that date from 700 to 1000 AD. Its former inhabitants used to consider it a sacred site for religious ceremonies.

* Uspallata
It is 105 kilometres from the capital city of Mendoza, to the west. It is located on the International Route 7 to Chile. It forms a valley of 60 kilometres, which has a head village with the same name. It has an important history and archaeology too.

Among its places to visit are:

– Las Bóvedas de Uspallata.
This historical monument, built in the late eighteenth century, was intended to the mining of gold and silver in the colonial era.

– San Alberto.
This is an area of rural tourism enterprises; there are ecological reservations and a fisheries sector.

– Tambos or Tamberías.
They used to represent the resting places for the armies of the conquest, while they served as accommodation for the communications and trading services.